There are two engine modes controlling the performance of the engine, Sport and Touring. Sport mode provides direct engine power in the middle and top power band, while Touring mode softens the output performance. The difference between the two programs in top power delivery is evident. Touring mode results in better tank range.

The impressive and discreet traction control is derived from motoGP gained technology. There are three modes, the standard mode 1 which is supposed for immediate action, mode 2 which is more discreet, disabling the system altogether is also available for off-road use.

Actually engine operation is meticulously raw, imitating a V-2 sound and power delivery. It resembles to a larger, aggressive TDM engine. Depending on the selected gear at the six-speed gearbox, 2000 to 2500 rpm will be needed to accelerate adequately.

Selecting Sport mode, torque provided up to 4000 rpm, is adequate for city rides. There is a noticeable torque increase at 6000 rpm, linear then up to the rev limiter which intervenes at 8200 rpm. Power output is slightly decreased just below the 8200 rpm figure. Top speed at 220 km/h indicated speed. The 23 litres fuel tank provides great tank range.

Despite the traction control in mode 1, drifts are easy and neutral on low friction streets or dirt roads. Every time that the system intervenes, tcs indication is lit on the dash. The shaft which is the final drive, is not really noticeable.

Riding position: The height of the seat is average for the standards of the category. Combined with the increased weight of the bike, it will not be satisfying for short riders.

The XTZ feels heavy, 261 Kg wet weight nominal, while centre of gravity is high. The width of the bike is increased at the front part, where the tank is surrounded by the fairing.

Rider is placed in and over the motorcycle, riding position is neutral and comfortable.

Rider may perform occasional city rides, since the weight and bulk of the bike will not helpful. Thus short city rides or commuting will gradually be out of question for the Super Tenere .

Steering lock is very good for the standards of the category, no top class though. Thus average gaps in traffic will be exploited. In the process of filtering, its the width of the bike that could be an obstacle. The height of the handle bar is much greater than car mirrors. Consequently, filtering will be adequate. As a conclusion, city rides will be satisfying at the suburbs, not downtown.

Comfort to the rider is good on roads featuring imperfections. However detailed handling feedback is provided to the rider.

On Β-roads the weight and bulk of the bike are diminished. However, it’s the greatly neutral handling that’s a pleasant surprise. Riding combines stability, effortless neutral handling and agility. Except from engine operation, handling is the second feature tο be enjoyed by the rider. As a result, riding gets tempting...

Suspension provides detailed feedback. Additionally damping of road imperfections is also great The combination of the two above will satisfy both fast riders and those who would like comfortable rides over bumpy roads. Suspension is fully adjustable in the front and rear, except from the compression damping at the shock. Adjusting the shock doesn’t require any tools.

At the fast pace there is no wobble. Feedback and confidence provided to the rider concerning traction, are really good.

On the highway, travelling speed will be around 170 km / which provides decent wind protection and exceptional stability.

Rider’s feet are well accommodated by the curves of the fuel tank.

On dirt roads, the weight and bulk of the bike will require the caution of the rider. However it’s a stable, agile bike that will meet the expectations.

Brakes are combined, ABS equipped. Combined braking is activated whenever rider starts braking by using the front brake. In any other case, ABS is activated although braking is not combined. Thus every time that the rider presses the front brake lever, the rear is activated as well. Their combination provides very powerful braking. Actually, the two disc brakes at the front provide great stopping power, powerful initial bite and decent feedback. The rear disc brake provides less detailed feedback. Consequently the combination of the front and rear brakes, provides great braking power.

Comments: The electronic controlling systems installed, result in increased safety from one hand. From the other hand they give the impression that these are installed in order to assist fast riding as well. This is due to their discreet operation.

The performance of the engine is not exceptional. However the torque produced, compensates power delivery. Rider will rarely need some excess power, as this is not a sports oriented bike.

Built quality – robust construction, together with many sophisticated details of the bike, give the impression that this bike is meticulously built, which will be appreciated by the rider.

The height of the seat and the screen are adjustable. The screen adjustment will require a screwdriver.

There are many factory accessories for the customer to buy 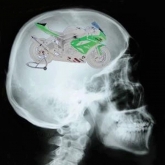