The Chris Pfeiffer model differs from the normal F800R, in colour (blue and red on top of the white, as well as Chris Pfeiffer’s signature on the fuel tank) and an Acrapovic exhaust. The change of the exhaust has increased the torque produced, top power output is virtually the same. The front rim is white while the rear is black. There is a pillion seat cover. The frame and engine are the same with those of models S and ST. The swing arm is normal instead of an single arm. Also the final drive is chain instead of a belt, which is used in S and ST models.

Engine: The parallel twin, liquid-cooled, injection fed engine of 798 cc delivers 87 hp /8000rpm and 8,77Kgm/6000rpm torque, nominal values.
Actually, the sound of the engine is impressive. It's loud and bass, rider will certainly like it. Acceleration is powerful, through out the rev band. Boost provided is instant and easily controlled by the rider. One reason for the title of this review, is the engine performance.

According to the selected gear at the six-speed gearbox, a minimum of 2000 rpm will be necessary for a powerful boost while applying the throttle. It’s a powerful engine especially at the lower and middle part of the powerband, no real need to shift gears to get decent acceleration. Power provided is linear, up to 9000 rpm, where the rev limiter intervenes.
Acceleration is adequate up to 180 Km/h. Air resistance will gradually decrease it above that figure. Because it’s a naked bike, comments for such a speed are really theoretical…

Riding position: The seat height is relatively low, while the width gets smaller to the front of the seat. This will allow even average height riders to step a firm foot on the ground.
The bike feels relatively light, centre of gravity is relatively low. The width of the bike is small, except from the handle bar that is slightly wider than ideal.
Riding position is between in and on the motorcycle. It is comfortable, somewhat to the sporty side. Rider is placed slightly to the rear, rider’s torso is leaning forward. There are some very sophisticated curves at the fuel tank, accommodating nicely the rider’s feet.
Tyres fitted are the Metzeler Sportec M3, dimensions are 120-70/17 for the front and 180-55/17 for the rear.

On the road: The suspension is relatively to the firm set, front and rear. There is no linkage for the rear shock absorber, adjustment of preload and rebound damping is possible. The sound of the engine is a surprise as was mentioned above.
Riding the bike, the first thing to be noticed is the superb agility. It is a top class agility in the 800 cc category and a superb one for the 600 c.c. class, the F800R is an extremely flickable bike. The wide handlebar also provides a great lever, in order to change direction.

On town rides, the superb agility together with the powerful punch at the lower and middle part of the power band, will be very helpful. The F800R could be a very capable commuting bike. The riding position which is slightly inclined forward, will not get tiring in every day rides.
Steering lock is very good, not top class though. Rider will take advantage of most of the traffic gaps. Close to the end of the steering lock motion, the handle bar tends to feel light. It feels like tempting to lock to the end, rider will get used to this after some hours on the bike.
In the process of filtering, the only problem that rider may face, derives from the handle bar. It is slightly wider than ideal, while at the same height with that of car mirrors. Town rides are comfortable due to the suspension.

Consequently, town rides with the F800R are in alert, due to the engine, riding position and agility. In case of congested traffic, some compromises will be asked if rider wants to get ahead of traffic.

On B – roads, the combination of the three factors described above, engine-riding position and agility, will excite rider's senses. The sound produced by the engine is fascinating, riding position is superb for nimble riding, the relatively wide handle bar provides good leverage and agility. It’s a motorcycle screaming attack.
In case that rider remains indifferent, riding leisurely on B - roads, he will feel that it’s a perfectly balanced bike for this purpose. After this mental achievement, this specific biker, is surely able to become a monk.
Reading the technical data sheet of the motorcycle, especially the 1520 mm wheelbase part, rider will certainly expect a touring bike handling. Well real life can be very surprising.
Also suspension is set right, between ride and handling, absorbing street imperfections the way it should.

At a nimble riding pace, rider feels somewhat like …free. Applying the throttle, therefore, feels like a conductor of an orchestra, ready to perform a masterpiece. However the result is not quite there. Tyres fitted were fresh stuff, although not really suitable for average friction roads. Suspension will set some limitations also at the fast pace.
Feedback while cornering is decreased on low friction B-roads. It is further  decreased as the pace gets faster. On the fast pace, feedback is quite low.
If rider keeps on charging, almost in racing pace, handling limits are to be discovered, some sliding is on the way to come. At a pace like this, rider has to apply some weight to the front end. Suspension could be fully adjustable then, however the price of the bike would be well increased.
It will be only on high friction roads that cornering will be neutral and …agile.

On the highway, riding position is very good for the standards of the category. Travelling is comfortable up to a speed of 150 km/h. The rider's torso is slightly inclined to the front, balanced by air resistance. However, if the pace gets faster, air resistance will be exhausting.

The F800R is equipped with very powerful Brembo brakes, steel brake lines. There are two disc brakes, four piston calipers at the front, a single disc brake, one piston calliper at the rear. Braking is considered an advantage of the Bmw, providing good feedback from the front, adequate feedback from the rear. Braking is really powerful, providing great control.
Perhaps braking control and feedback on a motorcycle equipped with ABS are not very important. However they amplify confidence, feedback and effectiveness, while braking.

Comments: It is a user friendly motorcycle, a cheerful and youthful character which is not common at the Bmw factory. Of course no one should expect it to challenge the S1000RR. Riding the Bmw superbike will require all possible riding techniques to improve time, while the F800R riding will require some of the rider’s funny side and …immaturity.
Replacing the tyres fitted is the appropriate move for the fast rider who will ride on average friction factor roads, without any compromises.

There are few elegant design details: the Led type indicators, the chain on the right side of the swing arm, the petrol cap and the fuel tank under the seat of the rider. An asymmetry is designed both at the dash and the headlamp. A steering damper is fitted.
The following optional equipment was fitted at the bike tested. Lap timer, indication of ambient temperature, indication of the tyre pressure, heated grips, trip computer and ABS.
Pillion will be comfortable due to the wide seat and the handgrip. These details are really traditional for the German factory.
Mirrors tend to blur around 130 km / h because of some high frequency vibrations. Rider will get their feel on the pegs and the handlebar.
Low fuel consumption is an advantage also.

- If the F800R will be compared at the 600 c.c. naked class, handling is presumed. However due to the famous signature on the fuel tank, expectations are really high. 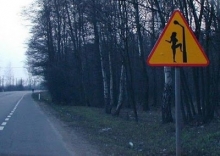