The scooter tested had clocked just 321 km. The performance described is obviously inferior to the one expected by the owner on a properly run-in scooter.
Engine: The air cooled single cylinder 125 c.c. engine delivers 9 bhp /7500 rpm and 0.98 kgm / 6000 rpm torque, claimed values.
Actually under full throttle acceleration from a standstill, the scooter accelerates to 20 Km/h very-very fast, very fast to 40 Km/h, adequately to 60 Km/h, slowly to 80 Km/h, very slowly to 100 Km/h.
Top speed is 105 Km/h, if rider is patient enough to see it happening... On a slight uphill street, top speed drops to 95 Km/h, while on the opposite direction, going slightly downhill, top speed is increased to 110 Km/h. The BW’s is not equipped with a kick start.

Riding position: The seat height is a modest 780 mm, its width is narrow at the front, wide at the rear. Thus shorter riders will have to sit at the front part of the saddle while average height riders may be sited at the middle, in order to step a firm foot on the ground.
The dimensions of the scooter are small. The BW's is a very light feeling scooter, 121 nominal Kgs curb. Setting the scooter on the main stand is really easy.
Rider is placed in and over the scooter. The in feeling is due to the high handlebar.

On the road: The fork feels soft, while the firmness of the two shock absorbers is average for the standards of the category. There is no possible suspension adjustment.
Tyres fitted are Kenda, with dimensions 120/70-12 at the front and 130/70-12 at the rear. They are not considered a good choice on average-low friction factor streets. Their substance contains a lot of nylon. An advantage for the scooter is the side tyre valves.

On town rides , the small size and the agility of the robust BW's will help the rider to overcome easily any traffic problems.
The top class steering lock is impressive. As it is widely known it was the inspiration of the famous poet Scooterider to write down an ode based on this feature. Back to seriousness, even the tiniest traffic gap will easily be exploited by the rider.
At the process of filtering despite the fact that the height of the handlebar and the mirrors of the scooter is the same with that of car’s and SUV’s mirrors respectively, there will not be any problem for the rider due to the small width of the scooter.

The comfort over urban street imperfections is better than what it is expected by the 12-inch wheels and the robust scooter construction. Eventually, the damping provided is very good by the standards of this scooter category, which is good for a scooter generally.
However on poor road surfaces, featuring continuous imperfections, damping will not be close to sufficient.

On B-roads the Bw's combines agility and stability. The stability is provided due to the robust construction of the scooter, despite the small wheels.

On high friction factor streets feedback to the rider is good, ground clearance is great.

On low-average friction factor B-roads, the increased stability provides confidence to the rider. Feedback to the rider is generally moderate. If rider persists on charging, eventually the tyres will slide away without prior warning. The abrupt sliding is typical for the category standards.

On the highway the BW's is limited by the low top speed. This use is not indicated.

On dirt roads the comfort provided is quite good, if there are not any great obstacles on the road. The fat tires and saddle provide the necessary comfort. In case of large imperfections, the short wheel travel will not absorb them, comfort is diminished. Consequently due to the small wheel dimensions, rider will not be satisfied on rough dirt road.

Braking is very good. The front 189 mm disc brake is combined with a single piston caliper. It provides powerful braking with good feedback to the rider and strong initial bite.
A characteristic sound is produced when the front tyre tends to lock on average friction factor streets. Thus rider will exploit braking to the limit after some time, like some early ABS systems, locking and unlocking the front wheel!
A 150 mm drum brake is equipped at the rear. It is very linear and relatively weak on asphalt roads, ideal for soil roads though.

Comments: An old-fashioned buzzer sound is equipped for the indicators operation, like a metronome in music. The step through floor is narrow at the front. The dash light is very pale green, some riders will love it while others will hate it. A magnetic lock is used for the ignition key.

The fuel cap is at the front of the saddle, out of it. During refilling rider will not feel convenient being sited on the saddle. Conclusively there is no riding advantage of the fuel cap outside the saddle, rider will still has to disembark, no need to open the saddle though. However there is storage space provided under it.

The red stitching of the seat, the anti-slip seat cover and the fact that the saddle is lifted by itself when opened, give some extra points to the really good build quality of the BW's. The storage space under the saddle fits exactly a full face helmet Shoei XR1000. The caliper of the front brake is painted red for some reason. The tubular frame is there to be seen at the rear of the scooter.

The horizontal twin lights of the older model are placed vertical to the new. The design is still special and beautiful, referring now to more on road orientation with respect to its predecessor. BW's name comes from the words Big Wheels. Thailand is the manufacturing country. 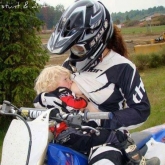