From 4000 rpm upwards a downshift will not be necessary in case of a normal overtaking. Engine performance is linear from idle to 12500 rpm.  Top end power is adequate for normal riding needs, it will not be delightful to an experienced rider  though.
The operation of the six speed gearbox could be better, which is amplified by the short gearing. The temperature of the engine remains low, even on congested traffic. An indicative fuel consumption figure  is 6 litres/100Km (47 mpg Imperial).

Riding position: The height of the saddle is relatively low, 785 mm, the width of the saddle is narrow, making it possible for short riders to step both  feet confidently on the road.  Tall riders will not feel cramped. Rider and pillion will feel comfortable with the increased  space provided.
The dimensions of the bike are average for the standards of the category, the width is slightly increased at the  fairing front.

The weight of the bike is greater than the expected from a 600 cc motorcycle. Its 217 Kg nominal curb for the specific bike reviewed, 222 Kg for the ABS version. It will not be a problem for the rider.    Rider is placed mostly over the bike, riding position is neutral, slightly bowed to the front. The handlebar may be adjusted in two positions.

On the road: Suspensions feel soft front and rear, a 41 mm fork is equipped at the front. There is no linkage at the shock, rider may adjust the spring preload at the shock, only.
OE tyres are Continental Road Attack, with dimensions 120/70-17 at the front and 160/60-17 at the rear. They are suitable for everyday use on cold climates, their frame is flexible in the case of  fast riding.

On town rides the XJ is quite a neutral and …humble  bike to ride. There will be no  negative comments from the rider’s point of view. Commuting will not become colourful on an XJ. The mirrors provide very good  rear vision.

On downtown rides, steering lock is quite good, maneuvering the bike.  On the contrary, in congested traffic filtering is average due to the wide handlebar.
This specific handlebar and the bar end weights  which are used at the XJ6 range,  ( Naked, Diversion, Diversion F), become a disadvantage for a bike intended to  town use. The width of the bike’s mirrors will not become an issue, despite that their height is the same with SUV mirrors.
Comfort provided on the XJ6 over  street imperfections is exceptional. However large potholes or bumps will actually be felt by the rider.

On B-roads stability is the key riding feature, agility is inferior to that. In theory this is due to the slow steering geometry and increased weight. The agility of the XJ6 reminds of a larger motorcycle,  it could belong to a 1000 cc bike.

On the highway, the seat is comfortable. It should be expected from a 600 cc bike, engine revs are increased in order to keep a decent pace. 8000 rpm correspond to just 145 km/h, 10000 rpm to 180 km/h, while top speed is somewhat greater than 205 km/h indicated figure.

Air pressure will be felt on rider’s helmet and shoulders.  In case that rider inclines the torso  to the front, things will get marginally better. Conclusively due to the engine rpm and air resistance, the speed of 160 km/h will be   really comfortable for the rider on the highway. Tank range is about 270 km then.

On dirt roads the XJ6 is very comfortable. It could be considered  as  a lower adventure bike, revealing some common genes and comfort from the …XT range. Dirt road obstacles are absorbed very well by the soft suspension, the low and neutral riding position is combined with the high and wide handlebar.   The only disadvantage derives from the on-road tyres,  which tend to provide low traction on dirt roads!

Twin 298 mm disc brakes, two piston calipers are equipped at the front, a single 245 mm disc, two piston caliper is equipped at the rear.
The front brake is user friendly, providing average initial bite. In case of emergency braking the fork is diving extensively, initially this will be confusing to the rider. As soon as it gets compressed though, feedback to the rider is relatively good.

The rear brake is very powerful, providing strong initial bite and relatively good feedback to the rider. In case of emergency braking, rider has to remain …calm with the rear brake!
On normal riding conditions however the combination of the  front and rear brakes provide  user friendly stopping power, nothing to worry the rider.

Model history/reliability/quality build: The naked XJ6 was introduced in 2009.  Engine was derived from  the FZ6 series with some modifications, a Diamond shaped, steel tubular frame  was equipped. The low cost effort is obvious.

There are three versions, the Naked, half fairing Diversion and full fairing Diversion F.  The latest two versions were manufactured after customers’ proposals for improved protection against the elements of nature. The Diversion  F version provides slightly improved protection to the rider’s legs compared to the base Divesion model, however the stability on the highway is enhanced. In  the USA the model name is FZ6R.
It’s a simple and reliable bike, no consistent problems reported.

Comments: The full fairing of the Diversion F version changes substantially the design of the bike, to the smart side, concealing further the low tag price.
The front area of the fairing is muscular, which is due to the twin fake intakes. Even the mirror arms feature a unique design. The silencer is placed underneath the engine. Pillion grips are nice, pillion footrests arms are very long though.
The positive design details end with the protruding number plate base and rear tail light. A centre stand, and a storage place for a U lock  under the seat are provided.

There are two spots in need of improvement. The first one is the indicator’s connectors which may be seen at the inner side of the fairing. The second one is the swollen silencer which can be seen at the right side of the engine if the bike is parked on the kick stand.
A rack, a  46 litres top case, a double bubble screen, LED indicators and many more  optional equipment are provided.

At the XJ6 series, Yamaha have used plain solutions in order to manufacture an integrated and cheap motorcycle, which may be a superb novice biker’s choice. At the same time it looks more expensive and meaner than it actually is. This is  difficult for a manufacturer to achieve, Yamaha did it.

+Sporty riding, in relation to the price

- Brakes at the non-ABS version. 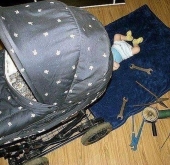