The bike tested is a 2011 model, suspension is set for track use.

Actually up to 4000 rpm nothing special is there for the rider. There is an apparent step at that point, performance gets linear yet average for a 600 c.c. supersport engine. It’s a typical class performance, maybe kind of discreet. Thus at the middle spectrum of the power band some additional gear shifts will be required compared to the competition, although the power increase compared to the 2006-7 model is obvious.
Power provided above 11000 rpm is really great, rider could achieve easily an indicated speed of 250 Km/h, (150 mph), and that’s not only on the highway. Top indicated speed will require some effort, almost 270 Km/h, (165 mph). That is close to a 1000 c.c. bike performance.

At the specific bike tested sometimes when the engine was cold it didn’t start easily. Otherwise, the operation of the injection is superb.The sound of the muffler is very stimulating and loud. It makes rider wondering if it complies with noise restrictions. An indicative fuel consumption figure is 6.5 l/100 Km, (43 mpg Imperial).

Riding position: The height of the saddle is great, 850 (!) mm, it will not be suitable for short riders. The dimensions of the bike are typical for the supersport 600 cc category, that is relatively small.
The bike feels light, 189 nominal Kg curb.

Rider is positioned above the bike, riding position is … racing. The torso of the rider is inclined sharply to the front, rider’s hands are charged with the weight. Rider’s head is over the front of the tank. The elbows are close to the knees. Since the editor of this review is rather small sized, it is logical for someone to wonder if large or extra large rider will fit onto the bike!
The riding position combined with the small dimensions and the firm suspensions, as it will be described later on, makes the R6 feel like a point mass, its a term used in physics, below the rider. Point mass, very robust though, is more descriptive to say.

On the road: Suspensions are fully adjustable, the springs are stiff, by default. At the specific bike, suspensions are set quite stiff. An inverted 41 mm fork is equipped at the front, a linkage is provided at the shock.

The tyres fitted to the bike are Continental Road Attack, with dimensions 120/70-17 at the front, 180/55-17 at the rear. They are considered a good choice for road use especially on northern countries. For track use they are a relatively good choice among the relevant road tyres.

In town  rider will not get excited. This bike permits to the sporty riding enthusiasts to ride through town or wander around. Riding position is tiring, a considerable body weight is applied to the hands of the rider.

On downtown rides, rider feels that this is an inappropriate bike to use. Riding position is really sporty, it’s not the most suitable for low-speed rides and constant stop and go’s.
Steering lock is disappointing for any Japanese bike which is supposed to take functionality into account. It’s one of the lowest measurements taken from www.moto-choice.com, no matter the bike category. Maneuvering around cars will require complicated geometrical calculations!

The R6 will filter adequately, the handlebars are low, the mirrors of the bike are as high as car mirrors.
Comfort is average. Rider should perceive this situation like a glass half full than half empty. Thus the comfort provided could be considered to be exceptional feedback even over road imperfections. Naturally, over large bumps, the R6 is just …leaping ahead.
Consequently the use of the R6 for town rides is not the most correct proposal for the owner.

On B-roads at a slow-medium pace, despite the fast steering geometry, (1380 mm wheelbase) and the low weight, stability is the key riding feature, surpassing agility. Sooner or later rider will comprehend that this is not a suitable riding pace on an R6. Its not really a bike issue, it’s the incomplete relationship feeling that rider gets…

The faster the pace gets, the more appropriate the R6 feels. The warm by now tyres, provide better feedback and confidence to the rider. The impression that a superb integration of harmonically co-operating parts is provided, is overwhelming to the rider.
The higher power band is used at such a pace, above 11000 rpm, power provided is great then. Riding position is superb, suspension settings are magnificent, rider feels very confident with the front end. At the same time the feedback from the rear is very good, rider feels directly connected with the rear tyre.

Compared with the standards of the 600 c.c. supersport category, agility is not top class. However the stability observed at a normal riding pace is still impressing. It is combined with an exceptional neutrality when things get tough, inspiring sureness and confidence to the rider.
The bike provides superb calmness to the rider at such a pace, as if its something completely normal. “Fast pace riding is what I call home”, the R6 seems to repeat confidently, while rider is wondering at the same time with the pace achieved on a public road.

Suspensions and frame produce a superb outcome, which means exact feedback and loads of confidence. The R6 may still insist that everything is OK, however riding pace has gone mental, rider gets a clear view of the situation: No matter how hard he tries, the riding limits of the R6 cannot be reached on public roads. This bike prefers sweepers instead of slow bends.
A steering damper is required at such a pace, the fast steering geometry makes the front end edgy, this may result in a tank slapping sometimes.
Conclusively on road rides the R6 is much faster than any rider, while its doubtful if many riders will come close to tame the beast on track. Yes, its that good.

On the highway, riding position feels again more neutral than it actually is on everyday rides. Due to the air resistance, the weight applied to the hands of the rider is decreased. Rider feels comfortable up to the speed of 150 Km/h (90 mph), above that figure he has to find some shelter behind that tiny transparent piece of plastic, meant to be a screen.
Doing that, the speed of 190 Km/h (115 mph) may be maintained on the highway. Anything beyond that produces an intolerable air flux directly on the rider’s helmet. The engine power is very good. The pillion will start complaining after half an hour of travelling…

Twin  310 mm disc brakes, four pots radial callipers are equipped at the front, a 240 mm single piston calliper is equipped at the rear. The front brake initial bite is adequate, the power provided is great though, feedback to the rider is good. The rear brake provides powerful initial bite, power provided is great, feedback to the rider is good.
Thus, braking is equivalent to the rest of the bike, with one exception though: On low friction factor roads, the front brakes are user friendly, the rear is quite more powerful than ideal. It may lock easily the rear wheel, the engine stalls then.

Model history/reliability/quality build: The R6 was introduced in 1999. A new frame and engine, fed by injection were equipped in 2003. That was a much lighter model actually.
An inverted fork and radial calipers were equipped at the 2005 model. In 2006 a new R6 was introduced, with aggressive design, low silencer at the right.

The 2008 R6 is based on that bike, engine is more powerful, at the middle and high spectrum of the power band, frame changes although the steering characteristics are the same, minor suspension, disc brakes, sub frame, design and riding position changes. However its 4 Kg heavier than the 2006-7 bike.
No specific reliability issues reported, quality build is very good.

Comments: From the riding position, the fairing looks bulky at the front. Its not ugly, just weird. Lights are powerful. The base for the number plate is meant to be removed for track use.
The design of the bike is really nice, dynamic, sculpting lots of edges, making some rivals look older especially at the front and tail sections. It should get nominated the sexiest 2008-12 600 cc bike title.

An aggressive bike has just been described. She is yawning and moaning when commuting, she starts to think things get interesting when rider has almost freaked out by the frantic public road pace. Consequently it’s a special bike which has been evolved for, and will fulfill the expectations of fast track riders, (rider has to be sincere to himself at that point). However at such a use she will prove being one of the very few bikes which despite the engine capacity, can provide a lot to the rider…

+ Riding at the limit for the experienced and fast riders + Design 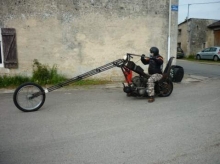