The bike tested was a 2000 year model, with 7200 Km on the clock, with some performance modifications performed. The silencer and the front fender are aftermarket items, a Renthal handlebar is mounted, the twin shocks at the rear are adjusted harder than default.

Engine: The four cylinder air cooled 1251 c.c. engine which is fed by a bank of carburetors, delivers 98 PS/8000 rpm and 11.1 Kgm/6000 rpm torque, claimed figures.
Actually a minimum of 2000 rpm will be required in order to obtain a surge-free acceleration with the fifth, top, speed selected. At the 2500 rpm mark a power step can be felt at the torque provided. Hence with 5th speed selected, from 60 to 110 Km/h (40 to 67 mph) which correspond to just 2000 to 4000 rpm respectively, the boost provided is great for urban use.

Performance is linear, up to 10500 rpm where the rev limiter intervenes. The rise of rpm is rather slow at the top, the power provided feels quite stronger than the 98 nominal factory claimed PS. It should be around 120 PS. The top speed is 220 Km/h indicated figure.
The gearbox is decent and smooth. The minimal indications are provided to the rider on the instruments. Speed, rpm meter and fuel gauge. Nothing else. An indicative fuel consumption figure is 9 l/ 100 Km (32 mpg Imperial).

Riding position: The height of the saddle is rather low, 795 mm (31.3 in), it will be adequate to short riders also. The space provided for the rider and pillion is quite roomy and comfortable, the area provided to the rider is elevated at the rear providing a stop.
The width of the bike is increased, especially at the areas of the fuel tank, handlebar and engine. Specifically the fuel tank seems to be vulnerable in case of a crash. Generally the dimensions of the bike are normal for a retro - naked 1300 c.c. bike.

The weight of the bike is great, 245 nominal Kgs (540 lbs) full, hence rider’s confident step on the road is essential. Average body type female riders will not feel very comfortable on the bike.
Rider is placed more in than over the bike, riding position is neutral. This handlebar is high and wide, rider’s torso is slightly inclined to the front.

On the road: The 43 mm fork feels soft, the two shocks at the rear feel relatively soft, despite the owner’s adjustment. The spring preload may be adjusted front and rear.
Tyres mounted are Bridgestone BT-016 with dimensions 120/70-17 at the front and 180/55-17 at the rear. They are considered to be a superb choice for this bike, enhancing grip.

In town the lowest area of the power band will be adequate on normal rides. The agility provided is quite a surprise, it will permit urban rides and browsing which normally could not be justified by the bulk and weight of this bike. The sound of the silencer warns the citizens that a threatening animal is unleashed out there…

On downtown rides, steering lock is superb, provided the character of the bike. Certainly its much better than that of quite a few everyday bikes with half the engine capacity. It will permit easy manoeuvring around cars.
Filtering will require some compromises because the height of the handlebar is the same with car mirrors. More confident remarks cannot be specified, because the bike tested was not equipped with mirrors.

Still on downtown rides, at the perpetual procedure of stop and go penalties, the weight of the bike will be felt as inertia. It will soon be tiring to the rider.
Urban street imperfections are absorbed very well from the fork, quite good from the shocks. In case that the shocks were not trimmed at that would-be-hard adjustment, comfort to the rider should be better. Conclusively, the XJR is a comfortable bike.

On B-roads the XJR is a neutral bike. Handling lies between stability and agility. Engine is very satisfying, providing the thrust required by the minimum number of corresponding rpms.
These rides are the most enjoyable at this bike category, the XJR is not an exception.

At the fast pace on low friction factor B-roads, the bike is agile and stable at the same time. However inertia is observed, really soon as the speed is gradually increased. Specifically the weight of the bike becomes obvious whenever a change of direction and a considerable acceleration-deceleration is required.
Handling is relatively good, although with these tyres mounted, rider should expect an even better performance. Particularly the front end provides confidence to the rider, while the rear slides in a kind of abrupt way.
Despite the new and sticky BT-016s, the engine torque and power could freak out the rear wheel on slippery roads at will. Additionally the soft suspensions make riding limits feel rather dim.

As the speed builds up on average-high friction factor B-roads, the XJR is gradually transformed. Agility surpasses stability, although she is a stable bike.
Change of direction and entry to the bend are quite fast, rider does not expect such a speed, given the bike geometry (1500 mm, 59.1 in., wheelbase) and the weight of the bike.
The wide handlebar which provides good leverage to change direction and the stop on the saddle for the rider when opening the throttle will be very helpful at such a pace. Riding fun factor is great then.
Curiously enough, the inertia and weight are not the key problems for the rider at such a pace. It’s the ground clearance the factor that will tame the rider. At the bike tested, the exhaust pipe just before the silencer was the first part to touch down at the right hand side. The pegs are also low.

On the highway the engine performance will easily propel the bike far beyond national speed limits. However the next to zero air protection will be a major problem for the rider at the speed of 150 Km/h, 90 mph, or higher.
This is not breaking news for the naked bikes category, although the bigger and more powerful the engine is, the more amplified the problem gets.
Additionally the bike starts to feel edgy at the speed of 170 Km/h, 105 mph, or higher, if roads are not absolutely flat.
This could become the travelling speed in case that the highway was certified in the aspect of levelness by NASA, CERN and the Max Planck Institute to say the least! Another detail: Rider should be a bodybuilder athlete also…

On dirt roads the XJR is a comfortable and agile bike. She will require caution, in case that she inclines to either side due to the road tyres, the bike weight will not be helpful at all then.

Twin 298 mm disc brakes, featuring four piston monobloc callipers, deriving from the R1, are equipped at the front. A 267 mm disc brake with a two pots calliper is equipped at the rear.
The front brake which equips steel braided lines provides average initial bite, its relatively linear, with average stopping power.
The rear brake provides also an average initial bite, its relatively linear, although its more powerful than ideal.
Therefore, in case of emergency braking, rider will waste precious attention controlling the rear wheel, instead of focusing to the front brake which is more effective.

Model history/reliability/quality build: The engine derives from the FJ 1100 which was introduced in 1984. It was then evolved at the FJ 1200, which with some modifications was adequate for numerous dragster races at that era.
Additionally it was used at the XJR model of the line-up which was introduced in 1995. In 1999 engine capacity becomes 1300 c.c.. In 2004 new wheels, carburetors, silencer and brakes modifications are introduced. Finally, in 2007 fuel injection and a catalytic converter are featured which did not degrade performance. In other words engine is 18 years old now, which is old. This requires some caution with engine tweaks which could result in substantial fuel consumption increase.
The reliability of the engine cannot be questioned. Quality build is quite good, the finish is adequate, on northern countries meticulous cleaning is required especially on winter use.

Comments: The primary reason that this bike stands out of the crowd is the retro design. Due to the large air cooled engine, the bike provides hints for brutal engine power. Due to the bike dimensions she achieves substantial road presence.
In terms of riding she may be distinguished due to the retro feeling that she provides to the rider, which can be riding pleasure and compromises at the same time. Consequently the future owner will get deep into the 80’s spirit. 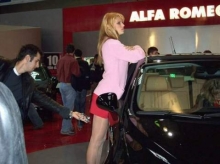