The bike under test had very little mileage on the clock. Hence, performance described below could be improved after a proper run in of the engine.

Actually the clutch is feather light. The engine will ask at least 3000 rpm in order to provide surge-free acceleration.
As usual with 125 c.c. bikes, she accelerates proportionally to the cars at traffic lights under normal conditions. In order to accelerate about the same with ordinary bikes though at traffic lights, a severe engine abuse will be required. From 3000 to 7000 rpm nothing interesting happens. At that figure though, the engine wakes up, feeling excited up to 11500 rpm, where the rev limiter intervenes.

Top indicated speed is 120 km/h, (74.5 mph) which varies greatly in case of adverse wind or road inclination. The fuel pump was kind of noisy at the specific bike tested. An indicative fuel consumption figure is 4 l/100 km ( 71 mpg Imperial).

Riding position: The height of the saddle is relatively low, 795 mm, (31.3 in), it will be adequate even to short riders.
Pillion is seated higher than the rider, the little seat is soft, however the knees form a steep angle. Thus its not expected to be a comfortable bike for the pillion on long rides.

The dimensions of the CBR have been increased compared to the ex-CBR 125, which was as big as a pencil, thus this is a proper little bike. At last! As an example the dimensions and the design of the new CBR 125 R are close to those of the CBR 250.

The weight of the bike is not really low, 137 kgs (302 lbs) nominal kerb, although it certainly feels like that. Rider is placed mostly over the bike, riding position provides alert combined with comfort, since rider’s torso is somewhat inclined to the front.

On town rides the little CBR is an agile and neutral bike. The engine is user friendly and weak, which is normal for the standards of the category. If rider is not in a hurry, everything is fine, an average biker will not spot any disadvantages. Not quite out of the blue, the engine fails to excite the rider though.

On downtown rides the agility and the low weight of the bike are very helpful. Steering lock is average for a 125 c.c. bike, it could belong to a proper motorcycle.
Filtering is good, mainly due to the small width of the bike. However either the handlebar or the bike mirrors are as high as car mirrors, which is well below SUV mirrors.
Comfort over street imperfections is very good, its definitely an advantage of the CBR.

On B-roads, the superb agility (1310 mm – 51.57 in. wheelbase, 25° rake, 90 mm – 3.54 in. trail) is combined with stability. It’s a most likely feature and a superb combination for the bikes of the category.
Engine should get stressed at a normal riding pace, the little CBR will be transformed into an effective and comfortable bike then.

At the fast pace, the combination of agility, robustness and stability makes the CBR a very effective bike. A nimble rider will be satisfied by the frame and suspensions. Nevertheless the petite engine will impose restrictions on level and uphill roads.

Quite remarkably there are downhill roads also, where the little Honda is transformed to a highly competitive bike, which will be sufficient even to expert riders. These riders should carry an angle meter, just to check the slope of the potential mountain blast! (That was a pathetic effort of humor).

On low friction factor roads, rider has another obstacle to overcome. That is the poor traction due to the OE tires, which don’t provide decent feedback to the rider. Eventually this is quite an issue, rider will moderate the riding pace.

On the highway, the CBR could be ridden briefly, engine will be obviously stressed. The speed of 105 km/h (65 mph) corresponds to 8000 rpm which combined with the top speed and the top engine power is not really safe in case of a pass. Its not recommended.

On dirt roads, the little Honda is very comfortable. Despite the average suspension travel, it’s a very effective bike. The only disadvantage is the riding position which is inclined to the front. Definitely, rider will not avoid dirt roads!

A 276 mm disk brake and a two piston caliper are equipped at the front, a 220 mm rotor and a single piston caliper at the rear. Brakes are linear, relatively powerful, providing comparatively good feedback to the rider. They match the character of the bike, the experience and age of the potential riders and the low friction factor roads that the bike will probably face.

Model history/versions/optional/reliability/quality build: The CBR 125 R was introduced in 2004. The small bike size was meant to be novice rider friendly although in many occasions it resulted to a disadvantage as stated at the relevant www.moto-choice.com review, here. Actually it felt like a toy to the rider as soon as she/he felt comfortable with the bike. In 2007 there were minor improvements.

In 2011 a new model was introduced, featuring proper bike dimensions, a larger fuel tank by 3 litres, (0.8 gallons US), total revised design, new silencer, rims, wider wheels, mirrors are fixed on the fairing instead on the handlebars, new clock and headlamp. The steel frame is the same, although the wheelbase is bigger, the weight and the suspension travel have been increased also. The engine was tweaked a little.

The effort of reducing the manufacturing cost is evident. As an example the key lock is inferior to the expectations of the rider, the are two bolt sealing covers on the handlebars although the mirrors are moved on the fairing. Rider has to hold the fuel cap when refueling, its not fixed on the tank. There is no pass warning or an engine run-off switch. From the other hand the clock is nice, a white light is provided on the rpm meter, an orange color for the LCD display.
There are indications concerning partial/total mileage , time, fuel level and engine temperature.

Comments: Its proven once more, an 125 c.c. bike is weak, she may be though a quite good one. It may be subjective, although an expert rider will not be excited riding such bikes, buying one just to decorate the living room will always be a temptation!
From the other hand, a teenager rider should feel proud to ride such a bike, like dating a quite pretty girl! The same applies to the Ktm Duke 125, Yamaha R125 and the Kawasaki ninja 250, which are superb examples of youthful design, aiming not only to the mind but also to the heart of the novice riders. 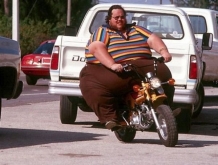