Riding position: The height of the saddle is average at 780 mm (30.71 in). However the width of the saddle is increased, hence short riders will not step a confident foot on the ground. Rider is placed mostly in the scooter, riding position is neutral. Specifically the handlebar is high, rider’s arms are spread apart on the handlebar. The high tunnel is not really convenient on commuting.

Leaning the Quadro static without applying any additional force, the three-wheeler almost stops there tilted, which makes it the most user friendly three wheeler scooter of the kind, suitable to female riders also.
Generally speaking the Quadro feels lighter to what someone expects from such a scooter. Presumably this could be expected since the nominal weight is 210 kg (463 lbs) nominal empty, which is somewhat lighter than Piaggio Yourban 300 cc.
The dimensions of the Quadro are large given the standards of the category, they are greater than these of Yourban and Mp3 300 rst. The pillion is seated quite higher than the rider, the saddle is comfortable and roomy, the handgrips are practical. The space provided to rider and pillion is quite ample.

On the road: The suspensions feel really stiff. The spring preload at the rear shocks is adjustable.
OE tires are Duro with dimensions 110/80-14 at the front and 140/70-15 at the rear. They are considered to be a really moderate choice, especially on low friction factor roads.

In town, riding provided is neutral, the Quadro will ask for small compromises. As an example while it’s a greatly neutral three wheeler and a very easy scooter to maintain vertical balance even by female riders, this mechanism deteriorates agility. Thus swift incline changes and heavy traffic are not favoured.

Piaggio’s Mp3 is equipped with two levers, one is the handbrake and the other is the the electric-hydraulic suspension block system lever. Thus releasing both levers, the Mp3 feels like any other mega-scooter of the market. On the contrary the Quadro features a single lever applying both as a handbrake and electric-hydraulic suspension block system. This results in a firm initial feeling when changing direction, it doesn’t feel close to a bike at the beginning of a bend.
Rider will soon discover the way to immobilize the Quadro with the brakes while trying to maintain it vertical with her/his body, without using the handbrake lever. However in case that the Quadro is not kept vertical, it will tilt slowly to either direction, rider will feel like being sucked into the sand.

On downtown rides the Quadro feels rather unwilling to change direction swiftly. As an example, in case that it is stopped at traffic lights and at the off has to start cornering immediately, it doesn’t really comply with riding commands.
Additionally the width of the Quadro will ask rider’s caution. Thus filtering is moderate, rider will need some time to adapt before filtering comfortably.

Steering lock is quite good given the character of the three wheeler, it will be helpful to the rider.
Comfort over street imperfections is comparatively good for the standards of the category, it could be even better. Compared to the scooters with the same wheel dimensions, comfort to the rider is slightly better.

On B-roads the stability provided is much greater than agility. It’s a greatly neutral three wheeler, satisfying the rider. This riding terrene suits the Quadro very much as well as this, normal riding pace.

At the fast pace rider will wish for greater agility. The Quadro will ask for some physical body strength by the rider to start cornering. Indicatively either on slow or on fast corners, rider will need to apply force on the handlebar in order to lower the internal handlebar towards the inside of the bend.
The front end provides great confidence to the rider while the rear wheel may be felt to oversteer at the exit of the bend, applying the throttle. Mounting more suitable tires for such a pace, feedback and confidence to the rider will be improved especially on low friction factor roads.

Eventually the Quadro at such a frenzy pace will demonstrate its front end uniqueness, the limits will be set by the tires and engine performance.
In case of a large bump during the bend at such a pace, the Quadro momentarily gets irritated, it certainly feels planted though immediately after.
As an indication for the safety provided to the rider at the fast pace, the question which three wheeler provides better handling, Quadro or the Mp3, the answer may be clarified only on a track. Certainly the Mp3 feels more agile, the Quadro feels more stable during the bend though. Is this a scooter test or a supersport type of thinking anyway?

On the highway the speed that the Quadro may carry is not adequate for safe trips, just short rides including national roads. Air protection is OK at such a speed. The seat is comfortable.

Two 240 mm rotors are equipped at the front, one 256 mm rotor at the rear. The foot pedal will satisfy car drivers providing combined front and rear braking.
The Quadro owners who are used to motorcycle controls, will use the two brake levers on the handlebar, for a more precise and confident braking. Brakes provide good initial bite, relatively good feedback to the rider and satisfying stopping power.

Optional/reliability/build quality: A higher screen, a higher seat and a top case are optional equipment.
The front end design of the HTS (Hydraulic Tilting System) is Italian, assembly is done in Taiwan by AEON, the manufacturing company of the Quadro’s engine also.
There are no specific reliability issues. Build quality and finish are quite good.

Comments: The storage space is adequate for a full face helmet as long as it is stored at its side. There is more free space at the front. Alternatively two jet helmets could be stored. The saddle opening is limited. The central gloves compartment at the front is equipped with a plug, it could accommodate e.g.  two mobile phones. A second gloves compartment is there for the rider suitable for winter gloves, although it cannot be locked.

The actual process of setting the Quadro on the centre stand is easier compared to what someone would expect.
The sporty styling is obvious, the Quadro looks quite mean. The red stitching on the saddle makes the three wheeler look even sportier. 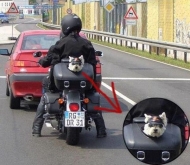