The scooter tested was a used one with some 11600 km, (7210 miles) on the clock. The LT version is a wider MP3 which provides a foot pedal except from braking hand levers. This permits car drivers to ride the MP3 without holding a motorcycle licence.

The Quasar engine has been equipped in every 300 c.c. Piaggio Group scooter and even more than that. The task for this engine here is to propel the heavy MP3 three-wheeler, which has an impact on acceleration. On town rides engine performance is very good indeed, on the highway though, travelling speed is somewhat decreased compared with the Piaggio Group scooters.
Consequently the Quasar performance is still satisfactory, especially compared with the former 250 c.c. engine, where the torque increase and instant acceleration are obvious. However its inferior compared to the 300 c.c. scooters. An indicative fuel consumption figure is 5 l / 100 km (57 mpg Imperial).

Riding position: The seat height is relatively high, the width of the saddle is great though. Hence, only average stature riders or higher, will be satisfied.
The pillion is seated quite higher than the rider, she/he may rest the back on the standard back support provided. The handgrips are convenient.

The MP3’s dimensions are increased, especially the width of the front fenders. The weight of the three wheeler is really large, 221 Kgs nominal dry, which is the equivalent of a big touring motorcycle.
Rider is placed in and over the scooter, riding position is neutral, the handlebar is comparatively high.

On the road: Stationary, the front suspension is hard, almost uncompressible. The two shock absorbers at the rear are relatively soft set.
Tyres fitted on this used bike are Maxxis at the front while the rear tyre is a Pirelli Diablo Scooter with dimensions 120/70-12 at the front and 140/60-14at the rear. They are considered to be a moderate choice for this scooter, especially on low friction factor roads.

At the right handlebar there is a switch for the electric-hydraulic suspension block system. If the switch is turned to the left, suspension is blocked, the scooter cannot  be leaned to either side. If the switch is moved to the right, the scooter suspension is unblocked, the MP3 may be normally ridden. This feature is useful in case of parking, on brief stops, at traffic lights if rider wishes to, etc.. On cases like these, rider may not step a foot on the ground.
Applying the throttle, this system is automatically unblocked. Rider will need some time to adapt, as the scooter has to be stopped vertically. If it is stopped and blocked leaning on one side, at the off it will immediately start cornering, which is confusing to the rider.

A handbrake is also available at the legshield, which operates like a car’s handbrake. It is activated when pulled upwards. Its useful if the MP3 LT has to be parked uphill or downhill. In case that both the handbrake and the electric-hydraulic suspension block system are applied, opening the throttle, the suspension blocking system is released, while the handbrake is still applied.

On town rides the MP3 LT is a safe and neutral three wheeler scooter. Of course the third wheel addition at the front increases active safety to a great extent, compared with ordinary scooters. Rider will feel very safe indeed when commuting. In case of riding at the fast pace, rider will get a motorcycle level of confidence.
Practically, rider is no longer concerned about handling on normal town rides.
Apparently, the two front wheels may not be on the same level e.g. in case that rider wishes to climb on a pavement. A front end slide is really a rare case on an mp3, which is the main reason for the increased safety provided.

On downtown rides and congested traffic, the MP3 LT is  heavier and bulkier than ideal. On conditions like these, rider will wish gradually for a 150 c.c. scooter or even an smaller than that. Piaggio  Yourban 300 which is smaller and lighter  three wheeler is better then. Rider is seated high, monitoring easily the traffic ahead.
Filtering is average, due to the wide handlebar which is located at the same height with car mirrors.

Steering lock is good given the character of the MP3, it will not enhance riding or impose restrictions manoeuvring the bike.
Damping of urban roads imperfections is quite good, better than the average 13-14 inch scooters. Riding comfort will not be lost on poor road surfaces.
Only in these rare cases where both front wheels simultaneously step on a road imperfection, the vibration is felt directly by the rider, who will be justified then addressing comfort issues.
Consequently on downtown rides and in case of traffic jams, the MP3 LT will impose restrictions from the rider. A scooter up to 300 c.c. will be better then, while the smaller Yourban is slightly better on such conditions.

On B-roads, a big and heavy street bike sensation is provided by the MP3 LT. Riding confidence is increased, equivalent to that of a motorcycle. That is normal for an MP3, extraordinary for any other scooter of the market. The MP3 is a satisfying scooter on any road. Its stable and neutral at the same time, agility is inferior to these riding elements.
For riders seeking for the tiniest detail, agility is not like that of any scooter of the market. While cornering, rider feels the front end to be heavy, somewhat different from normal, that feeling is deriving from the triple clamp.

At the fast pace, riding confidence is still great, although feedback to the rider is relatively good. Riding pace will be really fast, however a motorcycle would be a more integrated bike for such a use.
Traction will be lost only at a …racing pace, which is virtually never for an average scooter rider. However, the Laws of Physics will not be negotiated by the MP3…
Rider will feel the rear wheel to oversteer at the exit then. Conclusively on everyday rides it’s a very safe scooter, even on slippery roads.

On the highway, travelling speed will be up to 120 Km/h. Rider will not face any problems whatsoever at such a speed.

Front brakes are relatively powerful, providing average feedback to the rider. The rear brake is powerful, providing good feedback to the rider. 240mm disc brakes, two piston callipers and steel brake lines are equipped on all three wheels. On high and average friction factor roads, brakes are superb.
The foot braking pedal will be adequate to car drivers, however it cannot provide the same level of feedback like the two braking hand levers provide to the sensitive (!) fingers of a biker. The foot pedal combines the front and rear brakes.

The MP3 Yourban version provides smaller dimensions, lighter weight and sportier design  compared to the MP3. The Hybrid version features an electric motor together with the internal combustion one and a plug-in technology.
Finally the Touring version with 125, 300, 400 and 500 c.c. engine versions. All these MP3s are manufactured also at the LT versions.
The MP3 LT is not provided with a kick stand or a 12 V plug. A top case and a screen are optional equipment.
From 2012 onwards, the model name MP3 is changed in some countries to Mp3 Touring, differences affect appearance mostly.
There are not any specific problems with the MP3s. Build quality is good, it could be even better though. Meticulous and frequent cleaning is required. The finish is good, the MP3 looks very classy.

Comments: The feet floor is not level of course. A full face helmet at its side will be easily accommodated under the seat, there will be still some free space around it. At the storage compartment under the tail a small full face or a jet helmet may be stored.

Finally, due to the weight-bulk-specifications, the MP3 LT will be satisfying to male drivers who have defined as their top priority the riding safety, if they have to use anything smaller than a car.
Because of these bike characteristics, riding daily on severe traffic jams, makes the MP3 LT a competent bike only compared to mega-scooters. Price could be an issue, not really for the majority of the Western world citizens though. 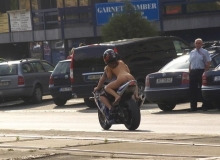