This scooter is based on the Aprilia Sportcity One 125, featuring mostly styling modifications.

Under full throttle acceleration the scooter reaches the speed of 40 km/h (25 mph) quite fast, 60 km/h (37 mph) well, 80 km/h (50 mph) adequately, 100 km/h (62 mph) slowly and it will require quite a lot of time for the top speed of 118 km/h (73 mph) indicated figure. In other words acceleration is linear, while the top speed is marginally affected by road inclinations.

The scooter tested was almost new. The future owner will get better performance than this after the engine is properly run-in and some thousands of km on the clock. Compared to the 50 c.c. Aprilia Sportcity One tested here (Derbi Variant Sport 50), the differentiation in performance is huge. Thus the 125 c.c. variant is recommended to the riders who can afford it or their licence permits that, instead of buying the 50 c.c. scooter. An indicative average fuel consumption figure is 4 l/100km (70.5 mpg Imperial).

Riding position: The seat height is relatively low, 775 mm (30.5 in) for the standards of the category, thus even short riders will step both feet firm on the ground. The Derbi Variant Sport feels light, 117 Kg (258 lbs) nominal dry weight, centre of gravity is low, dimensions are small.

On the road: Suspensions’ stiffness is average. A 32 mm fork is equipped at the front, a single shock absorber at the rear. OE tires fitted are CST with dimensions 120/70-14 front and rear. They are considered to be a moderate choice in terms of handling.

Οn town rides the Variant Sport is a very capable scooter, providing instant confidence to the rider. Both the engine and the scooter’s set-up are satisfying.

On downtown rides the scooter is very stable. Given that it is a small, 14 inch wheeled scooter, agility is inferior to what a rider would expect.
Street imperfections are absorbed adequately considering the wheels dimension and the price of the scooter. Generally speaking comfort to the rider is relatively good, although there is an exception. Riding over bumps the rebound of the front end stretches to maximum, resulting in a light ram of the front end. This takes place both in and out of urban areas.

Steering lock is normal for the standards of the category, it could be even better than that, achieving tighter steering radius.
Filtering is also good, due to the small width of the scooter. Actually the height of the handlebar and mirrors is about the same with cars’ and SUVs’ mirrors respectively.

On B-roads the scooter is very stable again. The combination of frame and suspensions creates decent confidence to the rider despite the OE tires. Even on sweepers close to the scooter’s top speed, stability is rewarding.

Thus at the fast pace given the scooter’s character, feedback to the rider and handling are relatively good. Upgrading the tires, handling should get even better. Except from the rebound issue mentioned above, riding quality is similar to that of larger and more expensive scooters, especially on high quality tarmac roads. Thus B-roads rides become an advantage for the Variant Sport, over the competition.

Wherever it is permitted for the little scooter, on highway use the moderate top speed will allow only very short rides. However stability is again a reassuring riding feature.

A 220 mm single disc brake together with a two piston caliper are equipped at the front and a 140 mm drum brake at the rear. Brakesare powerful, providing relatively good feedback to the rider. The initial bite is powerful from the front, average from the rear, that means that the drum brake is quite user friendly. Thus on slippery streets emergency braking will require some caution by the rider, while on high friction factor streets brakes are close to ideal, without an ABS of course.

Comments: The rider’s feet floor is flat, which will permit carrying of large objects. Under the seat there is adequate space for a just a medium full face helmet. The storage compartment at the legshield will indicatively accommodate a pocket camera.

The red stiching on the saddle is beautiful. The mirrors are superb in terms of functionality and design. Rider’s shoulders do not obstruct the view, while looking through the mirrors is close to the rider’s field of view at the front. Α kick starter is standard equipment. The side stand is optional equipment. Build quality and finish are quite good. The youthful design is an additional advantage.

Like the Aprilia Sportcity One, a 50 c.c. engine variant is also manufactured, delivering 4 bhp. Both these manufacturers, Derbi and Aprilia belong to the Piaggio Group which uses to refresh the enthusiasm of the market by introducing the same products under a different brand name from a different member of the Group.

-Rebound of the front end 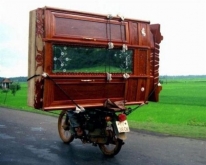