Actually the sound of the engine is distinctive, yet its certainly a twin cylinder one. The power of the engine is superb for a scooter. Full throttle acceleration is explosive for the scooters’ standards up to 140 km/h (87 mph), it is moderated at 160 km/h (99.5 mph), while the top speed is 180 km/h (112 mph) indicated figure. Generally speaking if rider wants to, the scooter accelerates very easily up to 160 km/h (99.5 mph), relatively easy up to 180 km/h (112 mph).

It sounds weird, although despite this power the scooter will rarely spin the rear wheel on slippery roads, without the aid of a traction control. This is due to a system which limits instant acceleration in order to protect the transmission. Thus anytime that traction tends swiftly to diminish, the engine power is cut abruptly once, like the engine is ready to stall. On very slippery conditions the system could intervene twice under rapid acceleration.

On normal traffic conditions the power of the engine is always instant and punchy, performance surpasses the needs of the rider and makes it clear that the C 600 is a mega-scooter. The final drive is chain in an oil bath, like the former T-max up to 2012. The short silencer looks like an aftermarket one. The fuel reserve lights up at the last two remaining dots of fuel level indication. An indicative average fuel consumption figure is 5.5 l/100 km (51 mpg Imperial).

Riding position: The saddle is high (810 mm - 31.9 in. while at the GT model its 780 mm – 30.7 in.), short riders will not feel very confident stepping a foot on the ground. Combined with the heavy weight, 249 kg (549 lbs) nominal, makes it rather inconvenient to female riders. It’s a positive thing though that the centre of gravity seems to be low. Additionally the low, centre tunnel is certainly convenient to the rider on commuting.

The pillion is placed much higher than the rider, the saddle is really roomy and soft, the knees form a natural 90° angle, while the handgrips are also really convenient. Nobody would expect Bmw to neglect the pillion, here is a fine example though for a superb hospitality on the C-600.

Τhe width of the scooter is average except from the handlebar and the legshield below it, which are increased. Generally speaking the dimensions of the scooter are within the standards of the mega-scooter category.

On the road: An inverted 40 mm fork is equipped at the front. The swingarm is single sided, the shock is horizontal. The spring preload at the shock was adjusted at the middle, which was fine for a 70 kg (154 lbs) rider. The stiffness of the suspensions makes the scooter absolutely robust front and rear. Suspension travel is 115 mm (4.52 in.)

OE tires are Pirelli Diablo scooter with dimensions 120/70-15 at the front and 160/60-15 at the rear. They are considered a good choice for general use although it makes a rather moderate option concerning handling. At these dimensions a fast rider may mount a softer compound.

In town the C 600 is a sporty scooter which may fulfill rider’s everyday needs, making them more special than they actually are. Thus, the scooter boasts stability instead of agility during the riding, while the sporty riding position and the increased weight will impose restrictions especially on really short and slow rides.

On downtown rides the aggressive character of the C 600 becomes an advantage, although the weight should be a disadvantage to mature riders. Steering lock is relatively good, it could be better for downtown use.

Filtering is good despite that the height of the handlebar and mirrors is the same with the height of cars’ and SUVs’ mirrors respectively. This should be due to the scooter’s width. Comfort to the rider is superb for the scooters’ standards. The C600 is one of the 2-3 most comfortable scooters of the market, no matter the scooter category.

On B-roads the Bmw is a really stable scooter. Stabilität ueber alles should be the proper German expression, which should mean stability more than anything else, in English. It could be more agile bike, after all it is a scooter.

At the fast pace the sporty character is mostly welcomed. The C 600 is very robust, jolly good, which is limited only by the tires fitted since they don’t provide adequate feedback. There is not a hint of oscillation or elasticity.

Hanging out of the scooter during cornering, the C600 is again really sturdy, rider may feel the rear wheel to oversteer at the exit, like on a motorbike. On conditions like these, riding confidence is increased, feedback is reduced though. Even over bumps at such a pace during cornering, the C-600 is really stable. Well done Bmw!

The differences with the T-max are minor at the fast pace, literally rider has to enter a track environment to spot them. Certainly the T-max has now got a great competitor. The C-Sport is not as playful as the Yamaha, which should be expected from a Bmw bike which is more serious as ususal, with a wider field of use and slightly less accurate concerning feedback to the rider, close to the limit. However concerning both these scooters at such a pace where feedback to the rider tends to diminish on the road, a sporty motorcycle is more involving, providing more detailed feedback, with a lower tag price.

The screen is adjustable manually (its bigger and powered at the GT model) in three increments with the use of knobs. The highest position is the most suitable for traveling. Thus on the highway, with the screen at the highest position at a speed of 160 km/h (99.5 mph) there is some buffeting by dispersed air, which is a kind of compromise. If rider inclines slightly to the front close to the screen, some vacuum will be felt.

At the lowest position air flux is directed under the helmet of the rider, which is not pleasant during a journey. Eventually the best traveling speed on the highway is 140-150 km/h (87-93 mph) which is very comfortable. Rider may extend his feet to the front on the legshield, which is much more comfortable on long rides.

Τhe ABS is standard. Brakes consist of two rotors at the front one at the rear, all of them 270 mm, two piston calipers and steel braided lines at the front, rubber at the rear.
The front brakes provide good stopping power, average feedback to the rider and comparatively good initial bite. The rear provides average power, feedback and initial bite. Thus the brakes are good for the standards of the category.

Comments: The C series of the Bmw scooters consists of the C-600 Sport, the touring oriented C-650 GT, which share the same 647 c.c. engine and the oncoming electric powered C-evolution. Now why it’s the second time that Bmw names differently identical displacement numbers (e.g. the F650GS and F800GS) two bikes sharing the same engine, that is comprehensible only to Bmw. The two scooters with an internal combustion engine defer to riding position, indicators, lights front and rear, the GT is heavier by 12 kgs (26.5 lbs), the Flexcase at the GT is larger.

Build quality and finish are superb. The mirrors provide excellent rear view. The kick stand becomes a handbrake as well. It’s a clever application, each time that the kick stand is activated, the rear caliper is actuated. A centre stand is also provided which has a limited swing travel, requiring some considerable force, which is an additional reason that this scooter does not address to female riders. The travel of the indicator΄s switch is also short. The gloves compartment at the left of the legshield is unlocked with the key of the scooter, while the right compartment cannot be locked. A 12 V plug is provided. The indications are provided through an LCD display except from the speedometer.

There is a switch opening the FlexCase which is an expandable underseat storage compartment. If the Flexcase is open, the scooter will not start. On normal conditions, that is on the run, a jet helmet and a motorcycle jacket may be accommodated. If the scooter is stationary two helmets may be stored. The engine will not come to life as long as the Flexcase is expanded.

The scooter tested featured the Highline optional package, with an extra cost of €980 including a heated saddle for rider and the pillion, (the latter in two modes and an option for a stable temperature) LED daytime running lights which are standard to the GT in two modes, LED indicators which cannot be installed to the GT, heated grips, tire pressure indications, and a trip computer. Additionally external temperature indication, fuel consumption, date, time, two trip meters.

In other words, this optional equipment list could be honourable to many motorcycles. Lights are very good. The shape of the front fender refers to the scoop of the S1000RR!

Τhe Bmw S1000RR was designed to match the handling of the super stable GSXR1000, the riding position and road handling remind of that a lot, except from the engine performance of course. This is the case also with the C-600, reminding very vividly the Yamaha Τ-Max in a slightly more touring and just as fast version, with an optional equipment list which would make jealous many bikes of the market. It combines luxury, many extras, and of course an uncompromised sporty character.

Compared to the Honda Integra which is a motorcycle dressed up in a scooter wrap, the field of use is comparable on normal riding conditions. However the Integra inspires calmness to the rider, while the C600 Sport prepares him for a … battle. This is the reason that the C650 GT has to tested as well.

Thus after the S1000RR, the C600 is another grand success by Bmw, a top class sporty mega-scooter right from the beginning and there is nothing left to envy the competition for. 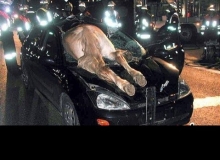