The scooter is equipped with a Smart key or Keyless system. In other words there is a transmitter which should be always carried by the rider in order to get the engine started. This was a system featured at the latest very expensive motorcycles and  luxury cars. Rider has to press the central rotational switch which is lit then in a blue color.

Rider has to apply the front or rear brake and press the start button, which will bring the engine to life and the rotational switch is lit with a blue and green light.

Twisting the throttle to the stop, the acceleration provided is very linear. The scooter accelerates relatively fast to the speed of 60 km/h (37 mi), moderately to the speed of 100 km/h (62 mi). The top speed of 145 km/h (90 mph) indicated figure is achieved slowly and it is affected greatly by any road inclination. The operation of the engine on everyday riding is smooth since it is quiet and vibrations-free. An indicative average fuel consumption figure is 4.1 l/100 km (69 mpg Imperial).

Riding position: The saddle feels relatively low although the height is just 745 mm (29.33 in), while the width of the saddle is broadened rearwards. Short riders will be seated at the very front of the saddle, while tall riders will be happier at the back of the seat.

Rider is placed in and over the scooter, the riding position is neutral, although the handlebar is high and it gets close to the rider. The floor at the rider’s feet is also high. The riding position and generally speaking the character of the scooter remind of the Sym GTS 300, that’s another scooter at the GT category. The pillion is seated much higher than the rider, the saddle is roomy providing the right firmness. Pillion’s legs form a natural angle, the handgrips feel also right. The support for the pillion’s back will be highly acclaimed in case of a journey. In other words the pillion feels quite comfortable on the S3.

On the road: The twin shocks at the rear may be adjusted for spring preload. The stiffness of the suspensions is average and especially the fork is slightly firmer than the shocks.
OE tires are Schwalbe Raceman with dimensions 120/70-14 at the front and 140/60-13 at the rear. They are considered a moderate choice concerning the handling.

In town the S3 is a neutral and user friendly scooter, which will be satisfying to the rider. The only compromise asked is due to the increased length of the scooter.

Street imperfections are absorbed moderately, they will be noticed by the rider, another similarity with the Sym GTS 300. The average comfort over potholes becomes a disadvantage on poor surfaced streets. The mirrors provide excellent rear view, there are no shoulders obstructing the view.

On B-roads the S3 is a scooter combining agility with stability, which coincides with the scooter’s character.
As the pace gets faster, the S3 gradually makes it evident that it was not designed for such a use. It’s a very good and neutral scooter, the handling is good for everyday use and the speed intended for, it doesn’t inspire confidence though when ridden fast. Initially it’s the feedback to the rider which is diminished, probably due to the tires mounted.

On the highway, the air protection from the large screen is comparatively good, even short riders will need to incline slightly to the front. However the GT character will make things easier on a journey, the S3 will preserve the speed of 130 km/h (81 mi) easily, while rider may stretch her/his legs on the legshield.

On dirt roads the average comfort provided is a disadvantage.

Comments: The floor is not flat. The storage space under the seat is adequate for a medium full-face helmet and a motorcycle jacket.
There are many glove compartments. At the one at the top right side of the legshield a pair of winter gloves may be stored, another one at the lockable compartment at the centre and two pairs at the space provided between rider’s legs. The left compartment of the legshield provides a small space and the fuel cap.

Concerning the equipment list, the only omission is the handbrake. Due to the low weight of the scooter, this is not essential.
Additionally, the standard equipment list provided is superb, which could meet the expectations of a gadget freak rider! The designer’s attention to highlight any feature with minor lights-Leds and colors becomes too-much sometimes.

Thus the S3 is equipped with a trip meter, rpm meter (which is not necessary to scooters), an initial check before the engine start up, the saddle is opened by a button on the legshiled, a red stitching on the saddle which is equipped with an anti-slip cover, Led daytime front lights and tail light, a 12V plug, centre and kick stand, 3D logos.

The aluminum covers on the handlebar and the legshield, do look superb. A fault found on the scooter tested was the cracked needle of the engine temperature instrument, at the bottom right of the dash. However, the build quality, the finish and the several gadgets provided will be more than adequate to the rider. The proud sticker “Made in Korea” makes it clear to the future owner that this is not a Chinese scooter despite the low tag price.

The colors featured on the scooter require a special paragraph on the this text: Thus despite the smartkey feature and the changing colour switch whenever the engine is started, the dash is blue, the lightened needles are red, while the LCD diplay backlight is green.

It’s a rare occasion for someone to comment on the designer’s commitment to detail. The blue switch for the lights at the left side of the handlebar is distinctive, (it could be black as they normally come), although in terms of styling it matches with the vivid blue backlight on the dash. In terms of looks also, the silencer is longer than ideal. 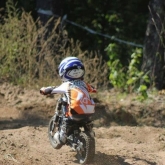