Engine: The twin cylinder 471 c.c. engine delivers 47.6 bhp/8500 rpm and 4.4 kgm/7000 rpm (31.8 ft lbs/7000 rpm) torque, claimed figures.
Actually the sound of the engine is a discreet twin cylinder one. The engine requires at least 2000-2500 rpm depending on the selected speed in order to provide surge-free acceleration. The torque provided at the low bottom is good, as an indication the range up to 5000 rpm is adequate for ordinary urban rides. With 6th speed selected these rpm correspond to 109 km/h (68 mph), while 6000 rpm to 130 km/h (81mph) indicated figures. Thus performance is quite user friendly even to novice riders.

The power delivery at the top range is very linear. At the 8000 rpm mark (170 km/h – 105.6 mph) indicated figure with 6th speed selected, the sound of the engine changes becoming a bark, although its too late by that time: the rev limiter intervenes at 8700 rpm. Indicatively this speed (170 km/h – 105.6 mph) is preserved even on minor uphill roads while at the opposite direction (downhill roads) the rev limiter will restrict the top speed at 188 km/h (117 mph). On a flat road the top speed is approximately 178 km/h (162 mph).
The fuel consumption indication is quite useful, average figure during the test was 5 l/100 km (56.5 mpg Imperial) at a fast pace of riding. There were some cases during the test that the gearbox missed the change from 1st to second gear. Although the bike was fairly new (just 2200 km - 1370 mi) on the clock, this is not usual for a Honda.

Riding position: The height of the saddle is comparatively low 785 mm., (30.9 in), permitting a confident foot on the road even in the case of a short rider. The dimensions of the CBR are ordinary for a 500 c.c. bike, that is larger than a 250-300 c.c. motorcycle.

The weight of this Honda is heavy given the engine capacity as it is felt with the bike being stationary: 194 kg (428 lbs) kerb. As an example, a weak (eg a female) rider will struggle to keep the bike upright if it leans to either side stationary. The weight of the ABS is 2 kg (4.4 lbs).
The rider is placed in and over the bike, the riding position is almost neutral. That means that although the torso is slightly inclined to the front, the handlebar is high, like on any bike intended for everyday use.

The pillion is seated quite higher than the rider, the space on the soft saddle is small, the knees form a comparatively sharp angle, while the grab rails are placed narrow and further to the rear than usual. Eventually the pillion could be accommodated somewhat more comfortably, except if the sporty nature of a bike should be determined mostly by the pillion position provided.

On the road: The 41mm fork is soft, the shock which may be adjusted for spring preload in 9 increments is comparatively soft, featuring a linkage. OE tyres are Dunlop D222, with dimensions 120/70-17 to the front and 160/60-17 to the rear. They have not been officially imported in several countries. They are considered a good choice in case of everyday use. On low friction factor roads the traction and feedback provided are average.

In town the CBR is a neutral and agile bike. Its very ordinary for a Honda bike, as soon as the bike starts moving, the weight becomes a negligible issue for the rider. The superb balance of the bike is one reason to that, which matches superbly the character of the bike.

On downtown rides the CBR will reveal its weight in the case of frequent commuting. At this aspect the Kawasaki ninja 300 gets an advantage. Comfort to the rider is really good, although the large road imperfections will find their way to the rider. Steering lock is comparatively good, it could be slightly better for a bike which could be used mostly in town.

At the process of filtering the height of both the handlebar and the mirrors of the CBR is the same with car and SUV mirrors respectively. Due to the CBR’s normal bike dimensions filtering is not top class for this bike category. Once more, in case of traffic jams, the ninja 300 gets another advantage.

On B-roads the CBR is very agile. Even better, the bike provides the stability required increasing the riding confidence on any instant. The balance of the bike is very good, the character of the CBR will satisfy various types of riders.

At the fast pace while the above mentioned advantages are also valid, initially the feedback to the rider is reduced considerably due to the OE tyres mounted.
On low friction factor roads the rider will just feel the rear wheel oversteering at the exit. However its not only about feedback to the rider. The combination of tyres with the increased weight of the bike and the average engine performance (for such a pace) becomes literally an impasse for the rider who will attempt a pure sport pace on the CBR. It’s good that an everyday bike can be ridden that fast, although it is not recommended for such a use, despite the CBR logo on the tank. Eventually this is a bike intended to A2 riding license holders.

On decent tarmac roads the rider will twist the throttle of the twin cylinder bike to the stop and he will be quite happier. Furthermore a sensible gap is created between the CBR500 and the quite fiercer Hornet – CBR600F as well as the smoother CBR250R - SH 300. Any rider wishing for even faster rides than the CBR600F, may choose the CBR600RR. The result of the above is that a Honda fan could be quite certain that there is no gap at Honda’s line-up. Once again, that Kawasaki ninja 300 manages to find some space within Honda’s line up!

On the highway the CBR feels quite comfortable, certainly much better than the ninja 300 on any speed above 130 km/h (81 mph). The traveling speed could be as high as 150 km/h (93 mph). The helmet and the shoulders of the rider are the areas that will get the air pressure initially, even if the rider will incline to the front behind the screen which is not adjustable. A tall rider will need a decent helmet although he will get buffeted by air at 150 km/h (93 mph) which is the maximum constant travelling speed. A larger optional screen is also available. Shorter riders may be seated further behind on the saddle even though this becomes tiring.

On the highway, when traveling at a speed 130-150 km/h (81-93 mph), one or two downshifts will be required in case of a decent pass. Actually at the speed of 130 km/h (81 mph) the power provided is adequate for an ordinary overtake, it will be much faster if rider downshifts 1-2 gears before the attempt. Except from air resistance, the comfort provided to the rider on the highway is very good. The CBR clearly excels on that aspect compared to the ninja 300.

If the CBR has to be ridden off-road, its comfortable due to the riding position. Generally speaking, the bike is comfortable and the rider will face less problems than what it is expected.

Τhe ABS brakes consist of single petal-type disc brakes with dimensions 320 mm at the front and 240 mm at the rear. A twin piston calliper and a single piston calliper are equipped front and rear respectively. The front brake is very user friendly although as sporty as it should be. Specifically the initial bite is good, the power provided is good given the bike’s character, although the feedback to the rider is average whenever the ABS intervenes.
The rear brake is even more user-friendly providing average initial bite, relatively good stopping power. Whenever the ABS intervenes the feedback to the rider and pulsing are average.

Comments: On the instrument there are two trip meters, and an indication of instant and average fuel consumption. The white-grey back light on the instrument is quite nice. The switches for the horn and the indicators have changed positions mutually, which is the latest manufacturers' trend, specifically Honda’s and a few others. However it is getting confusing as riders who tend to ride several bikes at the same period will be puzzled. The manufacturers should determine by themselves a final position for the switches as in case of emergency a rider will not activate the indicators… The lights of the bike and especially the headlamp are quite powerful.
Regarding the reliability, a typical valve clearance check has to be done at 1000 km (600 mi) from new, which literally increases the cost of the bike. After that check, valve clearance check intervals are 24000km(15000 mi) while an ordinary service is required after 12000km (7500 mi). Thailand is the manufacturing country.

The CBR500R belongs to the same family with the naked CB500F and the crossover CB500X, with changes affecting only ergonomics and styling. The latest trend concerning the Honda bikes is producing different motorcycles out of a common platform, like the NC700 Integra-NC700X-NC700S, VFR1200F-VFR1200X. The looks of the CBR500R remind the initial 2003 CBR600RR. In Japan the above mentioned bikes get a 400 c.c. displacement.
During this review some comparative comments were written regarding the ninja 300, since the CBR500R aims mostly to Α2 riding license category. If a rider does not belong to this group, then the Kawasaki er6f (ninja 650) and Yamaha diversion xj6 (Fazer6), are more expensive motorcycles and the most relative competitors of the CBR500R. They provide an edge in character and potential, which especially in the case of the er6f (ninja 650) they cannot be argued.
Honda regains the advantage with the CBR600F, although the customer will pay a dearer price then.

+ The only bike providing a multi-task character and  real touring potential at the Α2 riding license category.

- Air protection in the case of a big rider 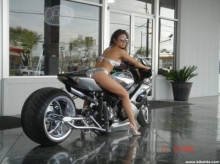