Engine: In theory, this 110 c.c. engine is air cooled. Its fed via a carburetor, thus the choke is manual. Output performance is 6.9 bhp/8000 rpm and 7.9 Nm/ 5500 rpm, nominal figures.
A semi automatic gear box is used, there is no clutch. The fuel reservoir is relatively small, 4.2 litres.

Actually on slight uphill roads, due to the proper gearbox ratio, Crypton will easily preserve the speed of 85 Km/h, rider only. The operation of the gearbox could be improved, as this gear box provides short travel of foot motion to change a gear and feedback to the rider is average. Thus engaging a gear could provide a more accurate sensation.

On the go this engine is economy oriented, while performance is inferior to that of the best in the category. This results to ordinary everyday rides, taking advantage of the torque provided. This is a simple task and it is achieved easily, defining a different field of use from the greater Crypton X 135. Due to the small fuel reservoir, even a small portion of gasoline gives wings to the fuel indicator. Fortunately the descend of the fuel indicator is slow…

Riding position: The seat height is low. The width of the seat is average for the standards of the category, allowing short riders to step firm feet on the ground, even if they are not sited right at the front.

Crypton is a rather small cub. Weight feels little, while centre of gravity is low. Rider is placed mainly over the bike,  slightly in, riding position is neutral, which is ideal for short commuting.

On the road: Suspension firmness is average, between soft and hard. The rear suspension is slightly softer than the front. The tyres fitted are Duro brand, dimensions are 70-90-17 at the front and 80-90-17 at the rear.

Steering lock, on town rides is superb. Combined with the decreased external dimensions, the little weight and low centre of gravity, agility is top class. Consequently Crypton will take advantage even of the tiniest traffic gap, no eyebrows raised.
Filtering is superb also. The handle bar is low and short, it will find a way under the car mirrors in most cases. Crypton’s mirrors will be just over the car mirrors during filtering.
Change of direction is a easy as possible, making rider’s life really easier. The result of the above is trouble free rides at congested streets, commuting, etc.

The fork absorbs street imperfections really adequately, given the category – price. As a disadvantage, the rear suspension, which consists of two shocks-no adjustment provided, doesn’t absorb road imperfections as sufficiently as the front does. Sometimes it may be crude, ride comfort reminds that of 15-16 inch wheeled scooters.. It’s another area that defines a different field of use from the greater Crypton X 135.

Otherwise on streets free of noticeable imperfections, Crypton is stable. On roads like this, steering is solid, Crypton is sure footed and will provide great confidence to the rider.
The various fields of use that Crypton may be serve, may include dirt road rides. Despite the fact that it was introduced at 2010, …slow-cautious dirt riding is almost the same with that provided by mopeds for the last ten years: Its relatively comfortable, it will deal with that also.

Braking is good, the front disc brake performs much better than the rear drum brake. Thus the front brake is powerful enough, feedback provided to the rider is relatively good. The rear drum is relatively powerful, feedback to the rider is average.
As a result the difference between the two lies to feedback only. The difference in braking power is what it is necessary and expected to be. The combination of the front and rear brake provides very effective braking power.

Comments: Obviously due to the cost factor, Crypton is not provided by a side stand, only a centre one. Provided the use of the moped, leg shield could be more effective from road dirty water aiming to rider’s lower feet. The rack which is standard fitted is practical , the storage space under the seat will accommodate gloves and few minor things. The chain is shielded so there will be less maintenance need.
Colour availability is red and blue. There are some sporty touches at the design, combining angles and curves together with some futuristic graphics.

Conclusively Yamaha provides two solutions for the cub category. The tag price of the small Crypton, the suspension in some cases-especially the rear and in some extend build quality also, are different from the top class current bikes. From the other hand Crypton T is much better than the category’s cheapest bikes.

Crypton goes back in time, a few years ago, possibly except from the design issue. It was an era that cubs were considered to be cheap bikes for every urban use. Thus they were really good to this, while tag price was low. The fact is that the liquid cooled engine, the 135 Km/h top speed and the almost top of the shelf suspension of Crypton’s X 135, is not really necessary for everyone, to pay the extra cost. Some people will disagree though: “You get what you pay for”. 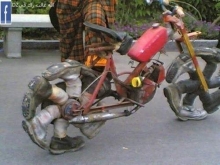