The German police in Munster is in search of a naked R6 biker. The video!


The biker with a nickname Baller Boyz on a Yamaha R6 had stripped of his clothes and took a ride in the town of Munster in Germany. He was not exactly naked though, as he was wearing his helmet, boots and gloves, thus there is no additional road safety issue! The provocation was that he performed some burnouts downtown on this outfit and he uploaded the video on YouTube on December 15th.
Now the video has been removed from YouTube (http://www.youtube.com/watch?v=gGs_gjY7c6U) as it was found to feature sexual content. Even worse, the name of the town Munster, derives from a Greek word meaning monastery… 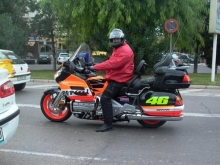