The police investigators examined the witnesses, Schumacher’s gear and the data recording from his helmet during the accident.

At a press conference the French police said that Schumacher was skiing off trail during the accident and the rock that he fell was eight meters away from the track limit. Mr Quincy said Schumacher was travelling at the speed of a "very good skier on fairly hard terrain" when he hit a rock and fell. He said the 45-year-old did not really reduce his speed when he went off piste between a red and blue piste.
There was not any problem with his gear. The investigators will continue to examine the data. Schumacher ‘s condition is stable yet critical. He is still in coma.


Investigators are studying the camera that was on Michael Schumacher's ski helmet for clues to the cause of a skiing accident that left him critically injured in a French hospital. The police seized the camera from Schumacher's family. It's not yet clear whether it was filming at the time of the accident.

Schumacher's manager Kehm said that his condition remains critical but stable. Kehm also said that friends and family who were skiing with him say he hit a rock hidden under deep snow and was catapulted head first onto another rock. He was not moving fast at the time, she said.


Michael Schumacher underwent a second surgery after a brain scan showed small, "surprising" signs of improvement, People reports. However, doctors said on Tuesday that they couldn't offer any insight into the prognosis for the Formula One champion, who suffered critical head injuries when he fell and struck a rock on Sunday while skiing in the French Alps.

"We cannot tell you any more about the future," said Gerard Saillant, a surgeon and friend of the family who is in Grenoble. Saillant said it would be "stupid" to make any predictions about Schumacher's recovery. However, Dr. Emmanuel Gay, the chief neurosurgeon at Grenoble University Hospital, said a brain scan performed late Monday showed bruising "a little everywhere" in Schumacher's brain, but also said the scan showed an unexpected easing of pressure. The successful second surgery was to eliminate the largest and most accessible bruise on the left side of his brain.
"We cannot say he is out of danger," Dr. Jean-Francois Payen, head of the hospital's intensive care unit, said. Payen said also that any neurological evaluation was currently "out of the question."


Michael Schumacher had an accident during one of his skiing trips. The Centre Hospitalier Universitaire de Grenoble, where Michael Schumacher was transferred soon after the mishap, issued a statement saying that the seven times F1 World Champion has suffered severe injuries. Michael has undergone an emergency surgery and currently, his condition is being described as critical. The statement issued by the hospital reads:”head trauma with coma, which required immediate neurosurgical treatment.“

The mishap happened when Michael was skiing in the French resort of Meribel in the popular Three Valleys ski area, when he hit a rock. Michael was flown to Grenoble Hospital in a helicopter. The former racing driver’s manager, Sabine Kehm, told the Associated Press: “We ask for understanding that we cannot give running updates on his condition. He wore a helmet and was not alone.”
Michael Schumacher owns a chalet in Meribel and is a regular at skiing. He retired from Formula 1 in December last year. He lives in Switzerland with his wife and two children. 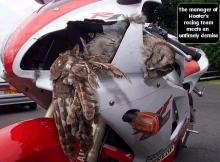