The single cylinder 250 c.c. ninja will be powered by the engine of the KLX 250 which delivers 28 bhp if unrestricted.

Some spy shots are circulating on the internet lately, of a new small Kawasaki bike being tested and some other bikes just before they make it to the showrooms. The new bike should be a single cylinder150 c.c., although a single cylinder 250 c.c. variant could also be expected in the future. Τhere will be two siblings, a faired and a naked motorcycle. The Trellis frame hints a sporty bike.
Will that be a more economical approach compared to the single cylinder 250 c..c. competition? Certainly it will be a cheaper variant to the twin cylinder ninja 250.

It seems that the cooperation with Bajaj was just the first step of Kawasaki in the low capacity segment with the launch of the Bajaj Pulsar 200 ns in specific Asian markets as the Kawasaki Bajaj Pulsar 200 ns. Thus Kawasaki has changed its strategy, extending the motorcycle lineup to the small capacity segment and entering the scooters world, two areas that the Japanese manufacturer was not interested to up to now, at least in the recent history. 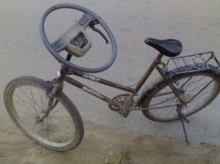