The MotorLand Aragon circuit proves again to be a special place for Chaz Davies (BMW Motorrad GoldBet), World Superbike Race 1 winner. It was a perfect race for the Welsh rider - who got his maiden podium in the series last year on this very track - out on his own after two potential winners were forced back to the pits.
Eugene Laverty (Aprilia Racing Team) and Tom Sykes (Kawasaki Racing Team) experienced technical problems - while they were on the lead - during lap 4 and 5 respectively and had to make their way back to the their garages. Aprilia works rider went back on track later on to test the RSV4 after the work done by his crew. The positive note for Noale's manufacturer comes from 2nd place and new Championship Leader (after Race 1) Sylvain Guintoli.
BMW chances for a one-two were denied by a false neutral experienced by Marco Melandri, who then had to make his way through from 5th to 3rd at the chequered flag. An unfortunate technical problem on the last lap stopped Davide Giugliano (Althea Racing Aprilia) from finishing in 4th place. Carlos Checa (Team Ducati Alstare) crossed the line in 7th place behind Jonathan Rea (Pata Honda World Superbike), Loris Baz (Kawasaki Racing Team) and Jules Cluzel (FIXI Crescent Suzuki).

A Sunday to remember for Chaz Davies, who repeated first race success and got a double race win at Aragon. The BMW Motorrad GoldBet SBK Team rider was unstoppable under MotorLand Aragon heat and crossed the finish line with a big margin over Sylvain Guintoli, still Championship leader after race 2. A race day to forget for second works Aprilia rider Eugene Laverty, who lost the front of his RSV4 on the opening lap of the race at Turn 2, straight after getting the holeshot ahead of Tom Sykes (Kawasaki Racing Team): 2012 WSBK runner-up was 3rd at the chequered flag after pulling away from a tenacious Davide Giugliano (Althea Racing Aprilia).
Fifth place for Marco Melandri (BMW Motorrad GoldBet), not as competitive as in race 1 but still able to finish ahead of Loris Baz (Kawasaki Racing Team) and Jules Cluzel (FIXI Crescent Suzuki). Both French riders had an outstanding Race 2, as Baz started from the last position on the grid and Cluzel moved off from the pit lane. Carlos Checa (Team Ducati Alstare), on his home track, finished in 8th place the second race of the day. 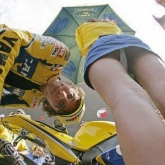