It’s been just over a month since KTM took an outstanding 1-2 finish in the notorious Dakar rally and the Austrian manufacturer announced that the all-new KTM 450 Rally Replica machine will be available very soon for customers to purchase. The new model of the KTM 450 RALLY machine in factory livery made its debut in October at the Morocco rally as a first and final test in race conditions. The machine was then subject to taking on the ultimate test at the Dakar, and the bike went on to work flawlessly throughout the 9,000km race with Marc Coma on-board to his fourth victory and KTM’s 13th consecutive win.

As the previous model of the rally machine was constructed for the 690cc era, this new machine was designed from the ground up to be suited to today’s Dakar terrain and the smaller capacity 450cc engine.

The bike features an all-new frame incorporating an ergonomic design, a slim body shape with a better seating position, completely re-worked rear suspension and a new overhead single cam 450cc fuel-injection engine. The bike also boasts a front and rear fuel-pump system with multiple tanks, which allows the rider to pick a fuel source to utilise the weight depending on the terrain.

For those seeking the next level in rally competition the 2014 KTM 450 RALLY Replica bike is available to purchase for EUR 24,000 (Plus VAT) and can be ordered through the local KTM dealer. A service and support package is available at the Dakar Rally at an additional cost. Νote the machine and service packages are both limited. 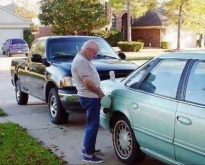