Either on normal road or on occasional track use, a sports bike could be crashed. Sometimes it gets as silly as dropping her on the parking lot. The carbon-fiber tail sliders provide protection and racing looks at the tail section. They are stuck on the tail by the silicon applied, thus R&G claims that it will not take the paint away if rider removes them. 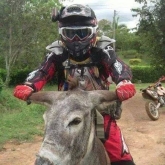