An enthralling MotoGP race at the Gran Premio Red Bull de la Republica Argentina saw Marc Marquez clinch his third win of the year, ahead of Dani Pedrosa and Jorge Lorenzo in the top three.

As the race at Termas de Rio Hondo got underway Marquez got caught up in the crowd on lap one but played it patiently, picking off his opponents to get into second - eventually hunting down early leader Lorenzo, with his winning move coming 8 laps from the end.

It was a good day for the Repsol Honda team as Pedrosa stayed in the chase throughout the race, eventually overtaking Lorenzo on the penultimate lap for second. Lorenzo’s Movistar Yamaha MotoGP teammate Valentino Rossi was briefly into second early on, but ran wide twice and dropped to seventh before fighting his way back up to fourth.

Marquez appears to be enjoying every moment of the first World Championship visit to the new Termas de Rio Hondo track and he set a superb 1'37.683s late in the 15 minute showdown to maintain his 100% 2014 pole record. Movistar Yamaha MotoGP’s 2010 and 2012 MotoGP title winner Lorenzo improved his best time significantly in the final stages to qualify second, a 0.742s margin from pole.

Pedrosa, meanwhile, was not far behind Lorenzo in third, his best time of 1’38.651s leaving him a second off the pole pace. Another good performance from Aleix Espargaro (NGM Forward Racing) on the ‘Open’ Forward-Yamaha puts him at the head on the second row, with Italians Andrea Dovizioso (Ducati Team) and Valentino Rossi (Movistar Yamaha MotoGP) qualifying just behind him.

After making it through from Q1 Bradley Smith (Monster Yamaha Tech3) will shoot for another top five race result from the front of row three, with Andrea Iannone (Pramac Racing) and Stefan Bradl (LCR Honda MotoGP) behind him. Bradl walked away from a big highside but looked somewhat shaken by the crash.

Alvaro Baustista (GO&FUN Honda Gresini), Pol Espargaro (Monster Yamaha Tech3) and the other rider to make it through from Q1, Nicky Hayden (Drive M7 Aspar), will get away from the fourth row.

As the riders learned their way around the new Termas de Rio Hondo track Marquez demonstrated his ability to go quickly at unfamiliar venues once again, recording a 1’39.313 best lap to put him clear of nearest rival Pedrosa.

Espargaro once again showed his pace and the potential of his ‘Open’ NGM Forward Racing package, placing himself third on the timesheet with a 1’40.566 best effort.
In fourth place was LCR Honda’s Stefan Bradl, the German rider who was one of a select group to test at this venue last year. He ended the day 1.578s behind Marquez.
Completing the top five was Andrea Dovizioso (Ducati Team) who ended the session riding his second bike after the engine on his first machine blew up early in the practice. The Italian lapped within 1.729s of P1.
Monster Yamaha Tech3 pair Bradley Smith and Pol Espargaro were sixth and seventh respectively, with Smith making a late improvement to jump from the foot of the timesheet as he improved his time by three seconds with a fast lap.

Valentino Rossi and his Movistar Yamaha MotoGP teammate Jorge Lorenzo were eighth and ninth after Lorenzo had gone fastest in the morning FP1 session. They will both look to step up the pace on Saturday morning.
Andrea Iannone (Pramac Racing) walked away from a heavy crash at turn five and returned to the track on his second bike to improve his time and complete the top ten. 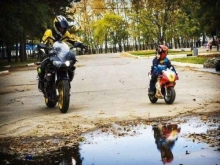