Google has manufactured a totally driverless car, equipping many sensors and a laser radar system which creates a detailed 3D map in order to specify the location and the surroundings of the car. The company test mules have covered more than 700000 miles - 1.100000 km on tests without a fault from the autonomous car.

Some 100 Google cars will be provided to citizens in California USA, where the company is based. The applications for driverless vehicle access will begin in July and the cars will hit the roads by September. In order to comply with the law in California, the cars will retain conventional controls. The top speed of the electric car for two passengers is 25 mph – 40 km/h. The passenger needs only to push the press button at the beginning and at the end of the drive.
The autonomous car will improve road safety, change the mobility of millions of people and that could mean also providing autonomous mobility to blind people. On the following video volunteers take a ride in California. 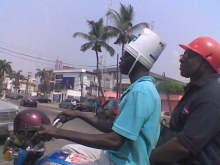