Left Side Story – Why Alan Kempster is Your Personal Hero

You probably haven’t heard of Alan Kempster before, but we promise that by the end of the video posted after the jump, he will be your personal hero.
A double-amputee, Mr. Kempster lost his right-arm and right-leg after a tragic accident, which saw a drunk driver hit Alan while he was riding his motorcycle.
Where many would have given-up, Alan persevered, and ultimately set out to resume his motorcycle racing efforts. Rigging his motorcycle to have its controls on the left-hand side, Alan finally convinced his local motorcycle racing league to let him compete.
He won his very first race. His racing number is ½. Respect. 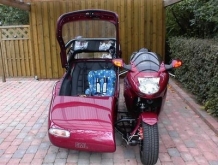