A new commercial for the 2013 water cooled Ducati Hypermotard.

The 2013 Ducati Hypermotard gets a new liquid cooled V-2, 821 c.c. engine which replaces the air cooled one and delivers 110 bhp/9250 rpm and 9.1 kgm/7750 rpm (65.8 lbs ft/7750 rpm) torque, claimed figures. Suspensions for the base model will be a Kayaba at the front and a Sachs shock absorber. The SP version will get a Marzocchi fork and an Ohlins shock.

In the video Nicky Hayden gets the time for a track day as his date is occupied at the loo. There is a short glimpse of Ruben Xaus at a rare slow pace of occupation in life, starring as …the security guard.

The frame is the same, the suspensions have small differences. The wheelbase of the Hypermotard is marginally longer. It seems that the Hyperstrada is a Hypermotard with touring potential due to optional equipment.

The Hyperstrada will also be equipped with traction control, ABS and three riding maps. The valve check intervals are very long at 30000 km (19000 miles). Could it be a rival for the Ktm SMT990?  The price for the Hypermotard is about 11500€. Τhe Hyperstrada will be more expensive at 12800 €. The price for the Hypermotard SP will be about 14600 €.

The version R is the most extreme of the Panigale series. The engine can be revved even harder by 500 rpm, at 12000 rpm due to motor upgrades, although top power is the same.

The Diavel Strada is the touring variant of the power-cruiser Diavel.

The modifications performed are basically a large screen, larger seat, heated grips and two power plugs. The price for the Diavel Strada will be around 19700 €. 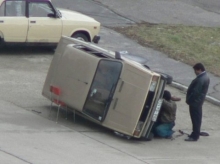