He knew where the radar was...

A French motorcycle rider on the island of Corsica has been "flashed" 52 times in the last 9 months BY THE SAME RADAR! You'd have thought he should know by now where that radar was located.

But the story is slightly different. He knew very well where the speed radar was located, and he also knew that the radar was front facing, so no way it could photograph his license plate. So he was speeding happily on the Yamaha 1700 V-Max, at times doing 172 kph in the 50 kph zone. And he was doing this always around the same time (late at night), wearing very distinctive clothing.
The local cops realized what was happening, and over the next few months started investigating. From the radar photos they could tell the motorcycle manufacturer and model, and since there are only some 10 of them on the island, it didn't take too long to find the culprit. The biker has not only lost his driving license but also his precious Yamaha and will receive a very big fine. 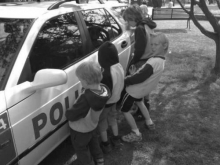