All sales go straight into the Kevin Ash Fund for the continuing education of his daughters. The sales store is only shipping to the UK at the moment. If you would like to buy something and get it shipped elsewhere then make a contact by email.

There are no further stocks of any of these items. Very few are new and boxed. Some are pretty new, you will have to read the descriptions and view the images.
It is reminded that the cause of the accident has not been issued or linked with some early recalls concerning the specific bike model.


Kevin Ash has died after an accident during the  new Bmw R1200GS  launch in South Africa. Kevin lost his life during the launch of a BMW motorcycle in South Africa on Tuesday.
He was not only a valued, knowledgable and highly regarded correspondent, he was also one of the friendliest people you could wish to meet. His passion for motorcycles and the pleasures of motorcycling knew no bounds and his skill – both as a rider and a journalist – were held in the greatest respect by the industry and his peers.


BMW released an official statement late last night, saying. "It is with deep regret that BMW Motorrad confirms the fatal injury of Kevin Ash in a motorcycle accident during a launch event in South Africa. The accident happened to the north of a town called George, 250 kilometres east of Cape Town. Out of respect for Kevin's family and friends, no further information is being made available at this time."

Fellow journalist Geoff Hill, who was at the same launch as Kevin, said: "No one is still quite sure what happened, and we won't know more until the police and BMW investigation has finished, but all of us on the launch from the British bike world are devastated, and are still finding it hard to believe that Kevin won't just walk through the door with a witty remark. "He was not only a legend in motorcycling journalism, with an unsurpassed technical knowledge and writing style, but a close friend to us all, and the world of motorcycling in general, and motorcycling journalism in particular, is today a much poorer place without him."

Kevin Ash, started his career in moto-journalism in 1991 writing for the British magazine Fast Bikes. In 1994 he cooperated with MCN. In 1997 he became a freelance journalist, writing for the newspaper Telegraph while his articles were published in numerous magazines around the world. He was also running the website ashonbikes.com where he posted most of his latest reviews. Kevin Ash was married, father of three daughters. R.I.P. Kevin, many bikers will be missing you. 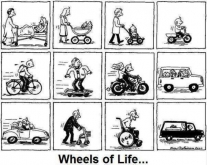