The aftermath: 4 bikers - including the groom-to-be, arrested.

2013/3/15. Hector Martinez, 24, and three of his fellow bikers were busted by California Highway Patrol for the Jan. 27 stunt, which stopped traffic on the I-10 freeway for several minutes.
At the incident about 200 bikers blocked cars on the I-10 freeway so Martinez could pop the question to girlfriend Paige Hernandez. The bikers were charged with misdemeanor public nuisance and participation in an unlawful assembly.


2013/2/2/. Last week hundrends of bikers caused traffic to come to a halt on the I-10 freeway near West Covina, California, USA so a member could propose to his girlfriend.

The bikers halted the traffic and the groom-to-be, Hector Martinez, 24, spun his back tyre to release a large plume of pink smoke. Mr Martinez then got off his motorbike and got down on one knee in front of his girlfriend, Paige Hernandez, who accepted his proposal. The bikers then got back on their bikes and drove off.
Reports say that the California Highway Patrol is investigating the incident and that the happy couple could face criminal charges. 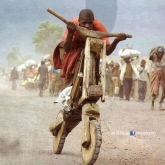