Max Biaggi, about his career.

A video from the 6 times World Champion.
MotoGeo did an interview of the “Roman Emperor” who was crowned last year again WSBK Champion, half a point ahead of Sykes. Biaggi has won four World Champion titles at the  250cc – that is three on an  Aprilia and one on a Honda – before racing on motoGP and finally on WSBK  where he ended his professional career  in  a glorious way refusing the renewal of his contract by Aprilia.

In  the following  video, we may see  Max to visualize last year and the significant moments of his career. He mentions his best motorbikes, the decision to stop racing, his family and his forecasts about the new Championship! Enjoy!

2013/2/21. According to www.motogpblog.net, there are some new aggressive statements by Max Biaggi concerning Valentino Rossi. Biaggi said that Rossi has no chance winning the 2013 Championship. He continued even worse by saying that Rossi resembles to the (magician) Copperfield: Despite his two bad years, he got the world champion motorcycle.

Later, not wanting to be misunderstood on his comments, Biaggi tried some explanations. “Saying Rossi is like Copperfield was meant to be a compliment. Only a magician like him could recover so well after two years that were so difficult” and “Getting back on the world championship winning Yamaha with Lorenzo was anything but easy. I wish them both good luck.”

It should be reminded that at the beginning of December 2012, there was a small step towards reconciliation between the two Italian riders on Sic Supermoto Day, a special day in memoriam of Simoncelli: Rossi initiate following Biaggi on Twitter!
It’s a pity that the relations between the two great riders had to get worse again, there was no meaning for Biaggi to make these statements. 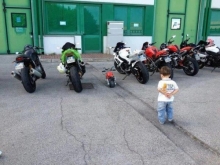