Inspiring and motivational best describe Darius Glover. Darius has been riding dirt bikes since he was 7 years old.

At 15, everything changed when he suffered a life changing injury during a race; paralysis from the waist down. Undeterred by those telling him he'd never ride again, Darius has found a way not only to ride dirt bikes, but to compete at the highest level of motocross.

Recent stints at the X Games and qualifications at Loretta Lynns show that no matter the situation, it's possible to do anything you want.

Darius' first race on his journey to the 2013 Loretta Lynn's is on March 9-10 at Tomahawk MX in Hedgesville, WV, USA.
RESPECT. 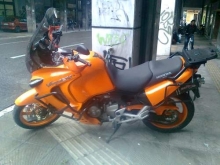