Lorenzo gets the hammer down for Catalunya victory


Yamaha Factory Racing’s Jorge Lorenzo has won the Gran Premi Aperol de Catalunya for the third time in four years, beating Repsol Honda Team’s Dani Pedrosa and Marc Marquez on Sunday afternoon. Valentino Rossi rode a lonely race to fourth position while as many as eight riders retired, including Cal Crutchlow who crashed out on the sixth lap.

Two weeks ago, Lorenzo had sealed his second victory of the campaign in Italy, and he now becomes the first rider to win three times in 2013, moving to within seven points of championship-leading Pedrosa. This afternoon, the Mallorcan made the most of the battling Hondas to pull out a lead of over one second with four laps to go. As he rode to victory, Pedrosa was forced to fight a rear-guard action even though Marquez had almost removed himself from the race on the penultimate lap. Heading into Turn 4 on the 24th of the 25 tours, Marquez suffered a significant scare and came perilously close to losing the front end of his bike. He would go on to reduce a six-tenth of a second margin to finish the race just six hundredths behind Pedrosa, although the key to his day had been a strong getaway from sixth on the grid.

Taking advantage of the dramas in front of him – such as accidents for Monster Yamaha Tech 3’s Cal Crutchlow and Ducati Team’s Nicky Hayden, going out in separate solo incidents on the tenth lap – Stefan Bradl enjoyed a second consecutive top five finish as Tech 3’s Bradley Smith celebrated a personal best result of sixth. The leading CRT rider for the sixth time in as many Grand Prix this season, Power Electronics Aspar’s Aleix Espargaro, finished eighth for the second race in a row, while GO&FUN Honda Gresini’s Alvaro Bautista was upset to have crashed on the opening lap following a near-miss with Valentino Rossi’s Yamaha.

The majority of the MotoGP grid will stay on for a one-day test tomorrow at the Montmelo circuit.

Comments: Marquez on this risky move to Pedrosa made the heartbeats of the motoGP fans go faster. Fighting to the very end becomes a characteristic of his on every race. However the other riders obviously will not take the risks he is willing to nor they will let him pass. Maybe in the future the Spaniard will make a serious mistake like making a rider chasing the Championship crash like the instant today, with Pedrosa. It is reminded that in Mugello, Marquez crashed four times and he was lucky enough to continue mostly unhurt.
Respect to Vale for everything he has achieved, although he doesn’t look very committed anymore. Could the end of his career be close?

Sunday’s MotoGP™ race at the Gran Premi Aperol de Catalunya will commence with Repsol Honda’s Dani Pedrosa on pole following an exciting qualifying session on Saturday afternoon. Also on the front row, for what promises to be a superb race, are Monster Yamaha Tech 3’s Cal Crutchlow and Yamaha Factory Racing’s Jorge Lorenzo.

Pedrosa is in impressive form on his 200th Grand Prix weekend and his pole time of 1'40.893 is the best ever lap of Catalunya. Slotting themselves in on the front row and also looking to get away from the chasing pack tomorrow are Crutchlow and Lorenzo, with the pair trailing pole-man Pedrosa by 0.608s and 0.673s respectively.

Lorenzo overcame an early clutch problem, swapping bikes to make the front row. From the second row, GO&FUN Honda Gresini’s Alvaro Bautista, who had his best qualifying of the year, Ducati’s Nicky Hayden and Repsol Honda’s Marc Marquez will also be hoping to mount podium challenges, having all qualified within a second of pole. From row three, the Italian trio of Yamaha Factory Racing’s Valentino Rossi, Energy T.I. Pramac Racing’s Andrea Iannone and Ducati’s Andrea Dovizioso will all aim to make their final improvements in Warm Up on Sunday morning in order to be able to challenge the leading six on the grid.

The scorching heat at the Circuit de Catalunya – track temperatures reached 57°C during qualifying – is forecast to continue on Sunday, meaning that tyre tactics will be as important as ever for the sixth race of the season. Many riders remain undecided, whilst Ducati pair Hayden and Dovizioso have already ruled out the harder option.

Set in the afternoon session, which saw track temperatures of 53 degrees Celsius, Rossi completed 17 laps and achieved a best effort of 1’42.297, leading Lorenzo by just 49 thousandths of a second, with Pedrosa one and a half tenths off the pace with a time set in the cooler morning conditions. Alvaro Bautista recovered from a morning accident to go fifth for GO&FUN Honda Gresini, rounding out the top five behind Monster Yamaha Tech 3’s Cal Crutchlow, who was only the second other rider in the top ten to set his quickest lap in the morning.

Repsol’s Marc Marquez ended Day 1 of his first premier-class home Grand Prix event in sixth position, having already pinpointed the Circuit de Catalunya weekend as one of the most difficult of the season. In seventh place, Ducati Team’s Nicky Hayden beat Alex Barros’ 2004 record for the highest top speed at the track, posting a 339.4km/h (210.8mph). The first ten was completed by Hayden’s teammate Andrea Dovizioso, LCR Honda MotoGP’s Stefan Bradl and Power Electronics Aspar’s Aleix Espargaro, who is one of six Spanish rides in the field this weekend.

Despite finishing ninth, Bradl suffered another fall as the German lost control of his Honda at La Caixa curve after loosing the front under braking. The sixth Spaniard, Avintia Blusens’ Hector Barbera, ended the day in 15th position as Tech 3’s Bradley Smith was taken to the Medical Centre for a check-up following an accident at the sweeping Turn 3. Much of the focus of the day was on tyre choice for the race, with the majority of riders already stating that the harder option front is a certain choice, whilst many will be using Saturday to decide between the softer or harder option rear. 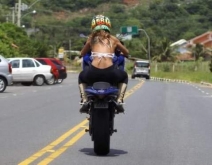