The annual Erzbergrodeo sees 1,500 competitors fighting for just 500 starting positions in the final Red Bull Hare Scramble. Riders take on the Rocket Ride, followed by the Iron Road Prologue and finally the Red Bull Hare Scramble – a gruelling race around the mountain and against the clock. The 2013 Erzbergrodeo was the 19th running of the event.

Check out the relief on Graham Jarvis' face as he crossed the finish line of the 2013 Red Bull Hare Scramble was clear to see. Hard Enduro's 'Silent Assassin' survived starting the flooded course from the second row of the grid to secure his first win at the notorious event. 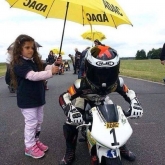