Nigeria manufactures its first motorcycle, wants to ban imports on all others

The National Agency for Science and Engineering Infrastructure (NASENI) on Tuesday rolled out the first made-in-Nigeria motorcycle, named Naseni M1, in Nnewi, Anambra State, Nigeria.
The Executive Vice-Chairman and Chief Executive Officer of NASENI, Dr. Muhammad Sani Haruna, who test-ran the 80cc capacity motorcycle in Nnewi, disclosed that the tricycle designed and produced by the institute would be ready early next year.
Based on the successes made by NASENI in the production of motorcycles and tricycles, Haruna said it has become imperative for the Federal Government to ban the importation of tricycles and motorcycles. He said the local content of the motorcycle is 85 per cent, while it was designed and fabricated by Nigerians. “The components not produced by NASENI are produced by companies in Nnewi,” he added.
Haruna said NASENI was already getting into collaborations with private companies that can mass-produce the motorcycles and tricycles.

Comments: The Nigerian cub which may also be delivered as a tricycle looks like a Honda cub. Dr. Haruna is the son of the Emperor of Nigeria.
Motorcycles are often perceived as a plain transportation mean, although bikers are interested also in styling, performance, handling, practicality on certain fields of use etc.
Hence, Dr. with our respect, a cub cannot be adequate or be acceptable to any rider. After all, there are still some funny stories around concerning ex-Eastern Germans and their Trabants. 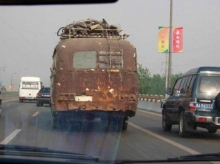