The Yamaha R-25 was revealed yesterday in Indonesia


Here are the photos and some specifications of the Yamaha R-25 which will be unveiled in two days!

A new spy shot of the Yamaha R-25 has been published on the Internet, just a few days before the official launch of the new bike.

Yamaha’s marketing department is working overtime during these days, setting up a new website, www.iwantyamahar25.com which is promoting the upcoming R-25.
This move comes following the http://global.yamaha-motor.com/showroom/revstation/ website already promoting the Tricity and the R-25.
At the www.iwantyamahar25.com the R-25 is shown as the link between the R-15 and the R-6, in a chain which leads to the R1 and eventually Valentino’s M1!
The 300 c.c. R-3 variant is expected later for the American and European markets which are more mature, yet not as promising as the Asian one for a quarter liter  motorcycle.

The latest photos are spy shots on the road as well as some static ones, indicating that the official launch is very close this time.

This sketch is featured at the front cover of the Japanese “Young Machine” magazine.

Yamaha teases the launch of two new bikes on March 25


A webpage has been set by the manufacturer, teasing the launch of two new Yamaha bikes, probably the Yamaha R -25 (R-3 in specific countries) and the Tricity three-wheeler. The R-3 could follow the competition from Kawasaki and Honda featuring a 250 c.c. or a 300 c.c. engine, depending on the country and legislation.

According to the latest rumors, just a few days before the official opening of the Tokyo Motor Show, Yamaha will present the racing variant of the upcoming R250. It is named R25. The road sibling will follow later.
It is reminded that the introduction of the racing version had preceded the road variant  also in the case of the Ktm RC lineup, a few months ago.

The engine is inline twin cylinder, six speed with fuel injection and the power delivery should be in the region of 34 bhp. The chassis is slim and compact. A telescopic fork is equipped at the front together with a single disc brake.


Yet another picture of the upcoming Yamaha YZF R-250.


The new bike could be unveiled at the Eicma motor show in Milan as new rumors suggest. Despite the speculation going on  for almost a year  now,  even the engine layout has not been determined.
Thus it could be a single cylinder 250 c.c. eg deriving from the WR-250F or even an all-new twin cylinder one layout. The frame-body could be an evolvement to the R-125 (150 in Asian markets). Please stay tuned, as one thing is certain: there will  be more gossip about the upcoming Yamaha YZF R-250, soon!


The styling of the new Yamaha YZF R-250 is confirmed with a new photo.  However a new question arises: What is the YZF R-03 shown?

A new frontal picture of the oncoming YZF R-250 confirms the previous side pictures which were published further below. This is probably the sharpest Yamaha ever built!
The fork is conventional, the indicators are LED, while there could be two false Ram-Air intakes!

The first images of the oncoming Yamaha YZF R-250 were published at the internet and they seem to be the real stuff.

The frame looks like a simplified deltabox, an inverted fork and a gull-arm designed swingarm are featured while the styling is quite sporty and aggressive. The engine looks like a two-cylinder one.
Additionally the Young Μachine magazine posting the picture announces the new three-cylinder YZF R-675. The advantages of the three cylinder 675 c.c. engine by Triumph have been explained thoroughly in the past. Yamaha has also expressed the will to build at least one three cylinder engine.
If this news is correct it means that Yamaha, usually a pioneer manufacturer, will follow the British firm at this engine layout and displacement like the Daytona. It could be an effort concerning the 600 c.c. displacement for more character and performance especially at the lower spectrum of the powerband, where a three-cylinder engine reminds of a 1000 c.c..
Since many mature motorcycle markets have financial issues, the joy in everyday riding gets more important than absolute top power which is essential in track days. It is also known that there isn’t any distinguishing progress concerning the 600 c.c. engines during the last years. In the future Yamaha is expected to include more three-cylinder engines at the line-up. 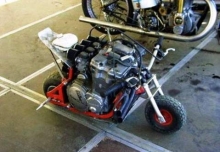