Bill Warner, the 44 y.o. speed land record holder with a conventional motorcycle, died after crashing with an estimated speed of 459 km/h (285 mph). He was trying to improve his 2011 top speed record of 502 km/h (311.945) mph on a conventional motorcycle which he had achieved over a 2.4 km (1.5 miles) straight road at the Loring Air Force Base in Maine, USA.

This weekend he was meant to achieve that on a 1.61 km (1 mile) distance on the same venue. However his motorbike, a turbocharged Suzuki Hayabusa turned off the paved road and crashed, after some initial attempts on Sunday. 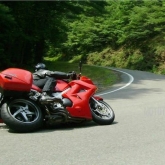