The engine seems identical to that of the current model, not a V4 one as it was speculated. Big Piston Fork, new shock, dash, alloy wheels, probably xenon lights.

There is no indication of an ABS or traction control. The design is changed, not much though. The video of the CBR follows at the end of the text.

Comment: The neutral riding position was a disadvantage of the current model at the fast pace. Additionally, lack of light-weight and discreet in their operation electronic control systems, is a disadvantage in our days.      The controversial design of the previous model is altered, the front of the new CBR is neutralized, reminding  of a …CBF 1000 a bit.      Conclusively, there is a question among many riders. These changes define a new model or a revised one? 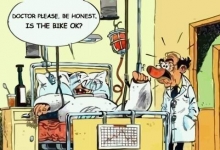