Twin 320 mm rotors are featured at the front together with radial four piston Brembo calipers. The dimensions of the wheels are 120/70-17 at the front and 190/55-17 at the rear.


A full MVICS (Motor and Vehicle Integrated System) is installed, incorporating a RbW, traction control, anti-wheelie control, and electronically assisted shifting, four engine mappings. The ABS is also standard.
The Lusso version is equipped with semi-active Sachs suspensions, centre stand and 60 L panniers, each one adequate for a full face helmet. The base model is equipped with fully adjustable Marzocchi fork and a Sachs shock.


The upcoming bike will be powered by the 800 c.c. triple cylinder engine which will deliver about 125 bhp. It is the first faired bike in the recent history of MV Agusta that it not entirely sport committed. The bike will be unveiled at the Eicma motor show in a  few days time.

The name of the bike suggests a fast touring motorcycle. Probably the bike will feature the three cylinder engine layout powering the Brutale, F3 and Rivale 800. In the case of this sport-touring MV Agusta the power should be then in the region of 130 bhp. More news on Novemer 4th, or sooner!

The photo further below illustrates the 2011 concept MV Agusta Tricruiser, designed by the students of Istituto Europeo di Design of Turin (IED). 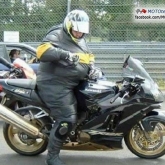