The Pierobon frame for the Ducati Panigale

The no-frame concept became a substantial problem for Ducati either on motoGP or WSBK over the last two years. Ducati Corse has recenty switched to a twin-spar layout on the motoGP bike. Of course this is not such a big problem when it comes to non-exotica racing as the results of the WSBK Superstock 1000 category demonstrate. Ultimately its only a theoretical issue when it comes to the road. However a small Italian firm introduces a Trellis frame for the Panigale.

Naturally it would be a good idea to see the two bikes, standard and framed, perform back to back on the track to support for or against this product. Nevertheless, only a few years ago a Trellis frame would be a part on a Ducati which could not be argued, since it was a major part for the winning formula. Even earlier in the past, there were specific firms, basically British and Italian, manufacturing aftermarket frames for the poor road-handling Japanese bikes of that era. Does history repeat itself on different conditions? 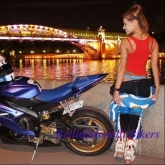