The girls were married at last!

The details of this marriage are given below!


Only in Netherlands: A female bikers couple is getting married with the expenses covered by the Dutch Motorcycle Expo!


The motorcycle exhibition in Utrecht Netherlands organized a draw with the lucky couple having their marriage expenses covered. The only requirement was both of them to be riding motorcycles. The winning couple were Anne van Os and Nomi Brands, two female riders and they will be married in two months time during the Dutch Motorcycle Expo. Netherlands was one of the first countries to allow marriage of the same sex.

The big question was popped out also in a bikers manner. It was Anne who rode to Nomi’s house with a flag reading “Will you marry me?” She knelt on her knees to ask the question and obviously Nomi’s answer was YES! 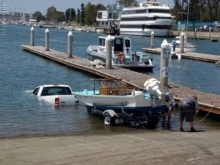