At the end of the review, there are photos of a Ducati monster art club contest participant, a really stunning bike.

Actually at least 3-4000 rpm are required, depending on the speed selected in the gear box to prevent surging when applying the throttle.
Engine response is generally linear, however there is a distinct increment at 6200 rpm, where power provided is increased. The engine is powerful, on highway use, sixth gear and 7000 rpm, the figure of 170 km / h is indicated on the dash.
Further higher, power is linear up to the rev limiter at 9400 rpm. There is no real meaning in comprehending absolute power numbers, the main advantage of this engine is the usable boost that is provided throughout the power band.

Compared with the Monster 620, the 696 is much more powerful at the top. The hydraulic slipper clutch is fairly light. Gear shifts should be decisive otherwise false neutral could be applied.
There are two aluminum mufflers, one at each side of the bike. They are kind of loud, producing a nice soundtrack.

Riding position: The seat height is low at 770 mm. Average, or even short height riders will step a confident foot on the road.

The length of the bike is small, the width is increased at the area of the handlebar and tank while the height of the bike is normal. The weight is moderate 161 Kgs nominal dry, center of gravity feels slightly above the middle of the bike.

Rider is placed mainly on the bike, there is a feeling created that the rider is sited above the front wheel. Riding position is sporty, not racing though. The torso of the rider is definitely inclined forward, like on previous models.

On the road: The suspension is relatively firm, front and rear. A 43 mm non adjustable inverted fork is equipped at the front, a single rear shock absorber adjustable in spring preload and damping is used at the rear. There is no linkage at the shock, it is offset at the left side of the motorcycle.

The tyres fitted on the bike tested were Bridgestone BT-016, dimensions 120/60-17 front and 160/60-17 rear. They are a very good choice, matching exactly to the character of the bike, enhancing grip.

Normal urban rides will be easy on the Monster. The engine will be very helpful due to the torque produced. Riding position will not impose any compromises, although its not commuting oriented. The Monster is a very user friendly, light and agile bike. Street imperfections are absorbed relatively well. On low friction factor streets, emergency braking will require caution.

The handlebar height is the same with that of car mirrors. The width of the handlebar is increased. However none of these two will result in a problem at the process of filtering. There were no mirrors installed on the bike tested.

The limited steering lock will ask for a compromise when commuting. Hence, city traffic maneuvering will require some planning. This should be considered a disadvantage compared to the humbler bikes of the class.

On Β-roads the Monster is very agile and neutral. Its a satisfying bike on leisure rides or at the fast pace. During leisure riding the Monster feels extremely agile. The wide handlebar creates a very efficient lever when changing direction.

At the fast pace, the Monster initially reveals some racing genes. It’s a very agile bike, although it’s the stability that excels. On average friction factor roads, feedback to the rider gets decreased when the pace is increased. At a very fast pace, the higher area of the power band should be used.
During the turn, the rider will feel then the rear wheel to over steer, nothing really more than that, in terms of feedback. ( Confidence to the rider is proportional to the feedback he gets in this case).
Consequently feedback to the rider is slightly better than average for the standards of the category, which is still below the standard expected by the rider from Ducati. That applies for a general purpose bike category also. The slipper clutch is very useful under these circumstances.

At the fast pace on high friction factor B-roads, feedback and handling are good, although this is valid for many current motorcycles.

Οn the highway, the riding position which is slightly bent forward, is very helpful. The maximum cruising speed that may be maintained is 150-160 km / h on the highway.
However, at a higher speed, air pressure grows really powerful. A decent helmet is required for a higher speed highway use.

Two 320 mm disc brakes at the front, a single 245 mm disk brake at the rear are used. Two radial, four pot Brembo calipers are equipped at the front, a two piston caliper at the rear. The front brake is quite powerful, providing a powerful initial bite and decent feedback.
The relatively weak rear disc brake provides average feedback. Braking power is superb, a little excessive for novice riders on low friction streets. The bike is also available with an ABS. The model under test was a non ABS, the sensor shown at the rear wheel brake photos is the speed sensor, providing data to the speedometer.

Comments: What is perceived as a tank is a plastic cover in real life. The front fender and tail may also be changed, thus the whole bike color may be changed by replacing these parts.
Although there is a 99 laps timer, battery charge level, there is no fuel level indication, except from a reserve led.

The 696 model replaces the 695 which was in production for the years 2006-7. The 696 is a completely new model featuring extensive changes to engine, chassis, suspension, brakes, weight, ergonomics and headlamp. Deliberately, the design of the two models remained similar though.

The production of the Monster started in 1993. 18 years and over 200000 monsters after that, an icon model and a reputation have been built, boosting sales. Except from the design which makes the monster looking magnificent year by year, handling is not improved proportionally.
Thus, while previous models e.g. the 620 were considered to set new standards to the category concerning handling, this advantage has been almost diminished. That is  compared with the expensive naked 600-750 c.c. bikes. An explanation for that is the absence of linkage at the rear suspension, cost reduction in general.

This is valid to those riders willing to push the monster in track days or on B-roads, because of the Ducati brand name.
For the majority of riders who need an exotic named stylish bike for normal everyday even kind of sporty riding, the monster is still an excellent choice. Ordinary riding will be converted to an interesting experience then. 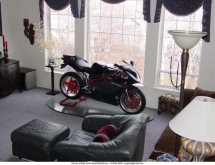