Engine: The single cylinder, air cooled, two valves 124 c.c. engine which is fuelled by a carburettor, delivers 11 bhp/ 8500 rpm and 1 Kgm/ 7000 rpm torque, claimed figures.
Actually engine will just require a touch on the start button to come to life, quite a Honda feature. Its a quiet engine, only a few dBs will escape from the silencer, engine vibration is negligible.
Engine operation is really smooth, initially rider will not be certain if the engine is still running. At traffic lights then, instantly opening of the throttle, is a reassuring procedure checking that engine is still operating…
Generally speaking the little Honda engine aims more to reliability and low fuel consumption than performance. Acceleration is linear, although fifth gear does not provide adequate boost up to the top speed of 110 Km/h, indicated figure.

Torque is equivalent of the small engine capacity. As an example rider has to downshift meeting an uphill road. In case of carrying a pillion, performance deteriorates significantly. Additionally, constant gear changes and use of the higher rpm spectrum are required to obtain a nimble pace of riding. Tank range is quite good.
Consequently the iconic XR model name defines a different bike from the renowned XRs two decades ago. This engine defines a bike which will meet the expectations of the rider on urban or dirt rides only. Maintenance is really easy, reliability is given.

Riding position: The saddle height is low, the width is increased. The dimensions of the bike are small, the height of the XR is normal though.
It’s a light bike, 119 Kg dry, consequently its easy for novice or small riders.
Rider is placed in and over the bike. Riding position is comfortable and neutral for any rider’s size, hands are spread widely on the handlebar.

On the road: Suspension is soft, there is no linkage at the rear shock. The only possible adjustment is the spring preload at the rear. The wheels prove an on-off road orientation, with dimensions 19 inch at the front and 17 at the rear.

In town the XR will provide comfortable and easy, trouble free rides. Rider will feel the confidence of an integrated bike when commuting. Riding is quite neutral. It combines advantages of a motorcycle with a moped’s ease of use, except from the use of the clutch of course.
Comfort to the rider is superb for the small urban bikes’ category standards, only large street imperfections will find their way to the rider.
Filtering is good, on traffic congested streets the handlebar will prove to be wider than ideal.
Turning radius is superb also, it will enhance commuting decisively.

Poor performance provided will require high engine revs in order to stay ahead from accelerating cars at traffic lights. Consequently despite the small engine capacity the XR will face any town challenge very easily, if rider will not raise any performance requirements. Usability is superb.

On B-roads, XR provides a mixture of agility and stability, the former exceeds, just by little. Like on urban use, engine performance soon defines riding limits, although the XR is a good handling bike. Riding confidence is good for the rider to exploit the limits of the small engine. Handling is predictable, on low friction factor roads feedback is relatively good. Any sliding will be progressive and relatively well controlled.

Nimble pace B-road riding will require serious engine abuse, obtaining poor results. Its obvious that highway use is out of the question.
On dirt roads agility, comfort and ease of use will be evident on the small XR. Rider will feel confidence for quite adequate riding pace. Ground clearance is good.
Engine limits will soon become riding limits in this case, also. Naturally, its a learner rider’s, ideal off-road bike.

A 220 mm disc brake, two piston caliper is equipped at the front, a drum brake at the rear. Braking is good and progressive, providing relatively good feedback to the rider.
On low friction factor roads, feedback from the disc brake is decreased due to the extensive diving of the front end, when braking hard.

Model history/reliability/quality build: It was introduced in 2003, without any changes, up to the end of the production. There were some ignition coils problems which were solved after a recall.
Quality build is relatively good for Honda standards, Brazil is the manufacturing country.

Comments: Mirrors are very wide, rider hat to focus away from the traffic flow to get a good look. This is a disadvantage when commuting. Objects look greater through mirrors.
The instrument, switches and mirrors reflect the simplicity and design age of the bike.
The character of the XR suits better to the former XL or XR-R line up Honda models, instead of the XR ones which were off-road oriented mainly. As an example, the XR 125 could be perceived to be a modern and smaller (in terms of engine size) XL 185, instead of an XR200R which was exhibiting an overwhelming character.
It’s the usual nowadays politically correct perception of the manufacturer, which degrades the glory of the past to extreme usability today. 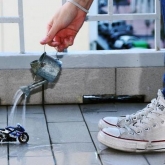