According to the selected speed at the gear box, a minimum of 2000 will be required to get a surge-free acceleration. A careful rider will notice two minor power steps at 4500 rpm and 6000 rpm. At 7000 rpm a led is turned on prompting for a speed up-shift, certainly a sporty touch for the big twin engine. Rev limiter intervenes at 8000 rpm.

Throttle response is instant, rider will take advantage of the superb torque to obtain a nimble pace of riding. Engine is not really willing for fast rpm rate change. At the top power produced is not impressive in theory, however because its greatly usable, it will be satisfying to every rider, matching perfectly with the character of the bike.

A shaft final drive is equipped which cannot be noticed while riding. A simple and discreet traction control is also provided as standard equipment, it may also be deactivated.
The heat dissipated by the engine will be felt on rider’s legs on town use. An indicative fuel consumption figure is 7.5 litres/100Km (38 mpg Imperial).

Riding position: The height of the saddle is great, it may be adjusted between 820 and 840 mm. It will be satisfying to riders taller than average. Average height riders will face an additional issue: The kick stand lies at the very front left side of the bike, it will be difficult to handle it. There is spacious room for the rider and pillion on the saddle.

The fuel tank, the cylinder heads and the handlebar increase substantially Stelvio’s width. However its not only a width issue, generally the dimensions of the bike are increased which is something to be expected from a large adventure motorcycle.
The weight of the bike is considerable, 257 nominal Kgs curb, (272 at the NTX version), which will be evident maneuvering the bike e.g. in case she is stationary. Rider is placed mostly over the bike, less in, riding position is neutral, riders arms are spread widely on the handlebar.

Riding position may be adjusted to the rider’s preferences, to a great extent. The knees of really tall riders may be touching on the cylinder heads. The editor will not face problems like that, not even in his dreams!

On the road: The suspensions provide a softy feeling, front and rear. A fully adjustable inverted Marzocchi 45 mm fork is equipped at the front. At the shock, the spring preload may be adjusted by a turning knob, the rebound damping may also be adjusted.

The factory fitted tyres are Pirelli Scorpion Trail with dimensions 110/80-19 at the front and 150/70-17 at the rear. They are perceived to be touring tyres, they do not favour cornering due to their rounded shape. Although they have been mounted on lighter bikes also, Stelvio’s increased weight is not an advantage in this case, also. On low friction factor streets or in case of a spirited pace of riding, they should be replaced.

In town, rides on the Stelvio will be within the standards of the big adventure bikes. Agility is very good compared to the bulk and weight of the bike, which is something to be expected from riders familiar with this bike category.
Rider will be comfortable on urban rides as long as they do not include traffic jams, the width of the bike becomes a disadvantage then.

At the process of filtering, the handlebar is higher than cars’ mirrors, it’s the same with SUVs’ mirrors though.
Steering lock is adequate, it will not be helpful through traffic. However comfort over street imperfections is great. Stelvio is one of the few bikes which can boast that any urban street turns flat under its wheels.

On B-roads Stelvio is a stable and agile bike. Confidence to the rider is good, feedback to the rider is relatively good.
The major advantage of the bike though is the character exhibited. The frame, suspension and engine provide a sporty riding touch, revealing the manufacturer’s genes.

At the fast pace the handling of the bike is restricted by the tyres mounted. They are not suitable for such use. It will be only on high friction factor roads that rider will exploit the potential of the robust bike.
However the weight will gradually become an issue then being felt as inertia when cornering. The slow steering geometry will not help either.

On the highway the best travelling speed will be 160-180 Km/h. Engine will sound gradually stressed from that figure upwards, top speed is close to 210 Km/h indicated value.
The saddle and especially the excellent air protection will make long journeys comfortable. The cylinders disperse the air flux away from rider’s knees. The hand guards from the NTX version would also benefit comfort on the highway. The screen may be adjusted to the height although tools will eventually be required.
The two knobs at the top of the screen should not be left loose after an adjustment, otherwise rider could see them migrating to any nearby village!

On dirt roads rider will enjoy mostly leisure rides. Its comfortable on dry, flat and open soil roads.
The weight will be an issue instantly on tricky paths or in case the bike leans to either side. The survival, physical and financial, instinct of the editor prevented any unnecessary risks on dirt rides. The wide handlebar provides decent leverage when changing direction.

The ABS is standard, it may be deactivated. Two 320 mm disc brakes, four piston calipers are equipped at the front, a 282 mm disc and a two piston caliper are used at the rear.
The Brembo brakes are very good and powerful, although close to the braking limit, feedback to the rider is greatly worsened especially at the front. The vibration whenever the ABS is engaged, is little.

Model history/reliability/quality build: Stelvio was introduced in 2008. Fuel injection response was improved after a factory update. Tyres needed to be inflated due to the spoked wheels used at that model.

Many improvements were introduced at the 2011 model, which mostly did not concern the design. The new model was named 8V and the major changes are alloy wheels, bigger yet discreet 32 liters fuel tank, the weak spot at 4500 rpm was transformed in a power step at those rpm, although maximum power was decreased by 4-5 bhp.
The quality build was significantly improved, the level of quality and finish is very high nowadays.

Comments: The single side swingarm at the right side of the bike, the silencer at the left, the beautiful alloy rims, the openings above the cylinder heads to protect the cowlings from the heat, the LED taillights, may be distinguished in terms of design.
Generally speaking, Stelvio is a distinguishable proposal at the uniformity of R1200GS and Varaderos on the roads.

The prominent riding features are the transverse twin-cylinder engine and the sporty bike character, eager for certain types of roads to deploy its full potential.
At this specific bike category almost every bike presents a unique character, Stelvio boasts its own though, which is not simply because of the manufacturer’s name on the badge. 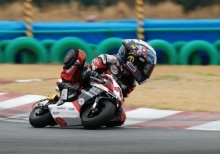