Engine: The V2 90° desmo 1099 c.c. engine delivers 155 bhp/ 9500 rpm and 11.73 Kgm/ 9500 rpm torque, claimed figures. This engine is derived from  1098 and 1198 Ducati models.
The S version defers from the base model engine due to the magnesium and carbon used for engine and head covers as well as camshaft belt covers.
A programmable and deactivated traction control (DTC) and a data analyzer-telemetry (DDA) are equipped, the latest monitors several measurements concerning engine and bike parameters which could be evaluated in case of a track day.

Apparently, engine sound is powerful, engine vibrations are vivid. Riding mood is instantly switched to “combat” mode.
A minimum of 2500 rpm will be required in order to get surge free acceleration, when applying the throttle. Power delivery is punchy and superb, no blank spots or delays whatsoever.
As an indication, on low friction factor streets, depending on the traction control adjustment, this system could be engaged at just 4000-5000rpm. Rear wheel slide is prevented then, rider may notice the abrupt engine operation and leds indicating the traction control engagement on the dash. Roughly at 10000 rpm the rev limiter intervenes, which results in some serious engine surging. An indicated fuel consumption figure is 8.5 litres/ 100 Km (33 mpg Imperial).

Riding position: The saddle height is great, 840 mm, which isn’t really suitable for average stature riders. The width of the bike is small, contrary to the wide handlebar and mirrors. The length of the bike is comparatively short, the height of the bike is increased.

Riding position is vividly sporty, rider is placed clearly over the bike, towards the front, the torso is inclined to the front also. On several bikes which are considered to be quite sporty, rider feels being on top of the front wheel. On the Streetfighter however, rider feels his head being at the very front, of the front wheel!
The wide handlebar cannot counteract the effect of such an aggressive riding position! The bike provides a light sensation, its a racing, not an imitating sporty motorcycle feeling, 167 Kgs claimed nominal dry.

Brakes: Twin 330 (!) mm disc brakes, with four piston monoblock Brembo callipers are equipped at the front, a 245 mm disc brake and two piston calliper is equipped at the rear. These brakes have been used also at the Hypermotard S, 1098, 1198 and Desmosedici models of the line-up.
They surpass the extreme nature of the engine and riding potion. On normal conditions, rider may distinguish some hints of linearity, their operation is not really close to that of an on-off switch.
However rider must be always on alert, the power at the front brake lever is immense. Feedback to the rider is very good. An ABS is not available.

On the road: The 43 mm inverted fork is fully adjustable. The shock at the rear featuring a linkage and a height adjustment for the rear of the bike is also fully adjustable. Both are Ohlins, providing a hard sensation. A single sided swing arm and Marchesini alloy wheels are equipped.
The factory fitted tyres are Pirelli Diablo Corsa III with dimensions 120/70-17 at the front 190/55-17 at the rear. They are considered to be a very good choice, matching exactly with the character of the bike, they are suitable also for track days.

Town rides sooner or later will be limited to minimum. The aggressive riding position is not suitable to low speed limits, it will be tiring, soon. The sound and engine vibration do get exciting for the rider.
According to the traction control adjustment, an eager throttle opening will result in a wheelie or a power slide in case that DTC is deactivated.
Brakes are more powerful than ideal for urban use. Emergency braking requires calmness and respect. According to the tyres mounted and the road friction factor, an eager brake effort may result in a rear wheel wheelie or a front wheel slide.
In case that the reader gets the impression that both the bike and the rider feel rather stressed in town, that is a positive statement.

On traffic jams the steering lock is average, it will not be helpful to the rider through traffic. At the process of filtering the height of the wide handlebar is the same with that of car mirrors, it will ask for a compromise.
Comfort to the rider is just moderate, urban street imperfections are transmitted to the rider. In case of successive street imperfections, the wheels may not be following the road surface. The excessive bike character depicted is amplified with the kick stand, which doesn’t feature a bulge. Rider will get used to it, eventually.

Summary: Due to the brakes, performance, saddle height, steering lock and the excitement provided to the rider as a whole, the usability of the Streetfighter in town is the same with that of an extreme racing bike.

On B-roads, rider feels alleviated. However again at a normal - legal pace he will feel like experiencing the temptations of St. Anthony. In religion terms it concerns the supernatural temptation reportedly faced by Saint Anthony the Great during his sojourn in the Egyptian desert.
The exciting riding position, the engine sound which is reflected to nearby mountains, a bit exaggerating here, the engine power which is about the same with that of Hulk and the stopping power of a wall may be considered riding temptations. In case that the rider manages to ride smoothly, he will be satisfied by the robust feeling and stability of the bike. The editor did not manage…

At the fast pace, all the parts of the bike start to feel in harmony. The riding nirvana is close. The engine performance will produce a wheelie at every instant, the front wheel should remain there for as long as the rider wishes to.

Its very easy to make a wheelie on a Streetfighter, just because of the sheer engine power. At the duration of the fast ride tests, the editor distinguished a tram crossing ahead. Just applying a handful at the throttle, the bike made a wheelie over the selected area, due to the instant throttle response. It was an effort imitating a fast, shallow, flat  river cross, which came true, simply because of this power delivery.

The robustness of the bike builds up confidence to the rider at such a pace. Turn in agility is deliberately partially sacrificed favouring mid-corner stability. Presumably this is something to be expected from this manufacturer, for quite many years now.
The long wheelbase (1475mm), and the 25.6° rake are the typical reasons for that. Consequently the handling of the bike is quite different from that of the 1098, which is supposed to be the basis for the Streetfighter. The wide handlebar provides the leverage to change direction quickly at such a pace.

Feedback to the rider is good as long as riding conditions resemble to the Standard Conditions being taught in lyceum chemistry: Temperature of 0 °C or 32 °F, and an absolute Pressure of 1 bar. The equivalent road conditions are decent, soft tyres on a dry high friction factor street. The pace of the ride is overwhelming then.
In case that these requirements are not met, riding limit is set by the oversteering rear wheel. On roads featuring imperfections, the non-adjustable steering damper has a lot of work to do at such a pace. Traction control will take over at the exit, transforming it to a pleasant, powerful and safe drive.

The brakes also provide a certain touch at the scenery of this battle. They provide as much power as the rider, the tyres and the road can handle at any instant. Thus, according to the riding mood and the traction, producing a rear wheel wheelie (or locking the front wheel with a speed of 130-140 Km/h and warm tyres at an instant), should be expected. Despite their immense power, they provide superb feedback as well as some linearity, which will be appreciated by an experienced rider at the fast pace on decent roads.
Conclusively the Streetfighter at the fast pace reminds more of a racing bike than a naked one. However the 1098 is a more integrated motorcycle on conditions like these, even without the assistance of electronic components.

On the highway, the riding position which is inclined to the front, will be adequate for a speed up to 150 Km/h, which is normal for a naked bike. Air resistance is trying to lift the torso of the rider, which alleviates the strain from rider’s arms. However the air pressure directed on the helmet is considerable. Travelling speed will be limited to 150 Km/h. The stability of the bike is superb, even at the speed of 250 Km/h, which is extremely tiresome though.

Model history/reliability/quality build: It was introduced in 2009, along with the base model, which did not include the Marchesini wheels, Ohlins fork and shock, carbon front fender, traction control and data analyser. From 2012 the smaller 848 c.c. sister is introduced. The production of the base Streetfighter ended in 2011. Reliability and quality build are superb.

Comments: The design of the Streetfighter is really nice, providing exotic rides to the same extent.
An extreme motorcycle has just been described. She will offer a riding nirvana to an experienced rider, only on suitable roads. Inexperienced riders will be better off, safer and faster on numerous other, more user – friendly bikes! This is a very muscular bike after all!

From the manufacturer’s point of view, Ducati pinpoints the history of modern motorcycles with such a brilliant bike. A reason that this is a vital member of the line-up is that she not a rival against the 848 c.c. little sister, which may be equipped with more electronic assistant components.
The comparison with older Monster family members, makes rider wonder whether they were produced by the same manufacturer! However those bikes had improved the skills of many riders, while an average rider on a Streefighter will get improved only to his prayers to any religion…

Certain photos were shot with a replica of a “trireme” at the background, which was a Hellenistic-era warship that was used by the ancient maritime civilizations of the Mediterranean. It was a fast and agile ship, becoming the dominant warship at that era. 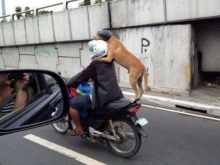