The speed of 70 Km/h (42 mph) may be maintained even on slight uphill roads. However overtaking beyond that speed figure requires some planning.
Top speed is just greater than 90 Km/h, ( 55 mph), indicated figure. An indicative fuel consumption figure is 4.5 l/ 100 Km (63 mpg Imperial).

Riding position: The height of the saddle is relatively low, average stature riders or higher will step a confident foot on the ground. The end of the rider’s area on the seat is elevated, creating a stop.
The dimensions of the scooter are increased for the 150 c.c. category, they suit more to a 200 c.c. scooter, especially the width of the leg shield just in front of riders’ legs.

The weight of the scooter is little, 120 nominal Kg, (264 pounds), which amplifies the user-friendly characteristics of the scooter.
Riding position is neutral, the handlebar is relatively high. Rider is placed mostly in the scooter.

On the road: Suspensions are relatively soft. The O.E. tyres are Kingstone, with dimensions 100/80-16 a the front and 120/80-16 at the rear. They are considered to be a moderate choice. On low friction factor roads they should be replaced sooner or later.

In town the LX150 T-5 is a user friendly, light and neutral scooter. It combines brilliant agility and stability.
Steering lock is superb, it will be very helpful on traffic congested streets.

Filtering is good. Actually the height of the scooter’s handlebar and mirrors is the same with that of cars’ and SUVs’ mirrors. However due to the reduced width of these parts, rider will not face a problem.
Minor urban street imperfections are absorbed very well, larger potholes reveal the short suspension travel and the average quality of the scooter’s suspensions. Conclusively the LX150T-5 is a relatively comfortable scooter. At the specific scooter tested, a part was loose in the leg shield area, which produced a quite loud noise over every pothole.

On B-roads the scooter is user-friendly, comfortable, agile and stable. In other words it’s a scooter tempting the rider for a faster pace.

On low friction factor B-roads, faster pace means as fast as the O.E. tyres will permit. That is not nearly fast, really. Rider will maintain up to a nimble pace then. Feedback to the rider is moderate due to the tyres, rider has to change them in order to exploit the potential of the scooter.

At the fast pace on high friction factor B-roads, the LX150T-5 is quite good, a tempting and fun creating scooter. Its stable and agile. Rider will achieve up to a nimble pace of riding, with two restrictions:
The first is the air cooled, 9 bhp engine which is proved to be weak for any sporty mood, even on downhill roads.
The second is the …tyres which provide reduced feedback at a nimble pace or faster. A tyre change is recommended to any rider dedicated to the fast pace of riding.

On the highway the LX150T-5 is not an adequate scooter due to the low top speed. Because of this, air protection provided is not an important issue.

On dirt roads the scooter is light, comfortable, concessive and very agile. It could result in a fun (!) creating scooter on roads like this. The noise from the leg shield as described above, was an issue though.

Α disc brake featuring a two piston caliper is equipped at the front. Initial bite is moderate, the brake is linear, powerful, providing relatively good feedback.
A disc brake featuring a single piston caliper is equipped at the rear. Initial bite provided is diminished, braking power is very linear yet powerful, providing moderate feedback.
The combination of the two brakes provided very food and user-friendly braking, which is considered to be a riding advantage for the scooter.

Comments: The footrest is flat. Under the seat a bicycle helmet or a shopping bag may be stored. The gloves compartment is shallow, divided in two areas, it will accommodate indicatively two pairs of gloves.

The lights of the scooter are rather weak, the headlamp provides a narrow, yet concentrated beam. There is a three mode switch at the right, rider may turn the lights off. At night the display is nice, it looks quite elegant actually. The empty space at the centre of the display will host an LCD clock in some future version.

A kick start is provided in case that the engine will not come into life with the electric start. However the left engine cover boasts Japan Technology, which looks like a cheap advertising trick from this Made in PRC scooter.

A disadvantage of the scooter is the quality build. This specific scooter was one year old, with 1000 Km ( 600 miles) on the clock. However the chrome coating at the levers was falling apart, some bolts and the two shocks at the rear were slightly corroded, while the locks were sprayed with WD-40 as they were almost stuck. The noises deriving from that loose part somewhere in the leg shield were extensively described above.
Consequently the LX150T-5 will ask meticulous maintenance from the future buyer. On the contrary, side tyres valves, a centre stand and rims polished at their sides are provided.

Conclusively the future buyer will have to think thoroughly issues of price, quality build and real life commuting needs.
In case that this scooter is selected, it will meet easily any normal commuting needs, with a really low tag price, if rider can make a compromise concerning quality build. Thus in case that Loncin LX150T-5 was a drink, a bitter/sweet taste would remain on the owner’s tongue.

- Quality build - OE tyres - In case that it was not noticed above, quality build. 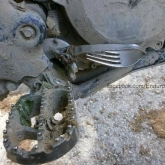