Riding position: The seat height is great, 845 mm. It will be adequate to riders with a stature higher than average. Pillion is seated slightly high and to the rear of the seat.
The dimensions of the bike are slightly smaller than the competition’s. The width of the bike is moderate. From the rider’s perspective, the length of the bike seems increased due to the plastic parts surrounding the fuel tank. Again the length is considered to be moderate by the standards of the category.

The bike feels relatively heavy, 209 nominal kg (461 lbs) full, for the ABS version. Actually the height of the saddle combined with the weight of the bike will not be satisfying to short riders. The reason is that it will be difficult for the rider to keep the bike upright in case that it leans to either side.

The rider is placed in and over the motorcycle, riding position is neutral, relatively relaxed, the handlebar is comparatively high. The footrests for the rider are a bit inconvenient on town rides as they are positioned just at the point that rider’s feet will step down whenever rider has to lay a foot on the ground. It may seem minor, however it requires some familiarisation by the new owner.

On the road: The firmness of the suspensions is moderate. The inverted 41 mm fork is fully adjustable while the shock absorber can be adjusted to the spring preload and rebound damping. There is no linkage at the shock mounted at the right side.

The tyres of the motorcycle under test are Dunlop D221 with dimensions 120-70/17 at the front and 160-60/17 at the rear. They are considered to be an average choice for a spirited type of riding, or unsuitable in case of riding on slippery roads.

City rides are really easy for the Versys which is very comfortable on everyday commuting.
At the process of filtering the handlebar of the motorcycle is higher than car mirrors. The mirrors of the bike are usually just higher than SUV mirrors. Eventually there will not be any problem for the rider during filtering.

Steering lock is very good for the standards of the category, it will be very helpful on congested traffic. This riding element has obviously been improved compared to the previous model.
Comfort to the rider is really good, of course its not perfect.

On B-roads agility is excellent, thanks to the short wheelbase of 1415 mm (55.7 in) and the high centre of gravity. It retains a joyful and vivid character, tempting the rider.
The stability of the bike is great. Handling is quite good especially on roads featuring a high friction factor. Feedback to the rider is good. Because of the great torque produced by the engine, continuous tight bends will not require constant gear changes.

At the fast pace, the tyres fitted will set the limits. On low friction B-roads, fast riding pace will require a tyre change to a softer compound. Otherwise, rider will be tamed, due to the diminished feedback. The front end feels likely to understeer.
On high friction factor B-roads, the Versys is decent, although a tyre change would again improve handling.

On the highway, Versys is stable, despite the short wheelbase of 1415 mm (55.7 in). Wind protection is pretty good. The screen may be adjusted in three increments. The seat is comfortable and spacious for the rider and pillion.
Travelling speed may be up to 190 km / h (118 mph) for a normal rider and the factory screen fitted. The engine is stressed at such a speed. Travelling is enhanced by the tank range.

On dirt roads, Versys is still a playful bike. The limits will be set by the road – oriented tyres fitted which do not provide sufficient grip.

Concerning the ABS brakes, there are two petal rotors featuring twin-piston callipers at the front, while at the rear a single wavy disc brake and a single calliper is used. The front brake is powerful enough, feedback to the rider is average though whenever the ABS is activated. The rear disc brake is relatively powerful, providing comparatively good feedback to the rider.
Whenever the ABS is activated, a very noticeable pulsing is felt on the levers. The bike seems to tell the rider “don’t worry about braking, in case it tends to slide away, the ABS will be there for you”.

Model history/reliability/quality build: Versys was introduced in 2006. In 2010 minor changes are featured, mainly in terms of design. Additionally the damping of engine vibrations and the quality build were improved. A LED tail light was equipped, the saddle for the pillion was redesigned. Except from the face-lift, in terms of riding the new model is marginally better, hence the title of this review.
No reliability issues reported.
Quality build is quite good.

Comments: The two sides of the bike are quite different to each other. The left side seems rather plain, a straight swing arm is exhibited. At the right side though, a gull wing swing arm, the exhaust underneath the engine and the shock absorber are exhibited. The headlamp looks like … a train. A top case was also mounted on the bike tested which was taken away at the time of shooting.

+ Fields of use + Agility 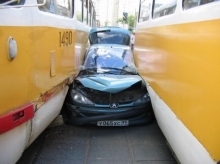