The engine has got the daunting task to propel the heavy scooter. If it were any other engine of the market it would be striving to accomplish the goal, although the power of this engine is unprecedented for a scooter.
Full throttle acceleration is frantic, on low friction factor roads there are only a few tires available that could maintain traction up to the speed of 100 km/h (62 mph). Τhe scooter accelerates quite easily up to the speed of 160 km/h (99 mph), satisfactorily at 180 km/h (112 mph). Actually the power provided easily surpasses the expectations of the rider, any given instant. The top speed is 200+ km/h (124+ mph), indicated figure.

Riding position: The height of the saddle is average (780 mm) (30.71 in) . The width of the saddle is increased, hence average stature riders or even higher will step a confident foot on the road. This is essential due to the weight of the scooter.
Rider is placed mostly in than over the scooter. Riding position is neutral, the handlebar is high and narrow.
The pillion is seated much higher than the rider, the optional top case mounted on the scooter tested, makes it difficult for the pillion to use the handlebars. Pillion’s knees form a very natural angle.

On the road: A 41 mm fork is equipped to the front and a horizontal shock at the rear, that’s the reason that the shock cannot be easily distinguished by the rider. The spring preload at the rear may be adjusted in seven increments. The stiffness of the suspensions is average, the suspension travel is long, 122 mm at the front and 130 mm at the rear. It should be noted that the engine is not attached to the swingarm, which also improves comfort.
The tires fitted on the scooter tested which are also factory installed, are Michelin Pilot Sport with dimensions 120/70-16 at the front and 160/60-15 at the rear. They are considered to be a very good choice for the specific scooter.

On town rides on normal traffic conditions, the big scooter is adequate. Specifically the GP 800 is surprisingly nimble, as soon as riding speed exceeds 20 km/h (12.4 mph). On slower pace, the scooter is comparatively clumsy.

On downtown rides, the weight of the scooter becomes a handicap when maneuvering around cars. The increased bulk of the GP 800 is the second issue for the rider. The central tunnel does not favor commuting.
Filtering is relatively good, the height of the handlebar is the same with car mirrors. Since the handlebar is relatively narrow, this is not a problem for the rider. The height of the scooter’s mirrors is about the same with the highest car mirrors.

Steering lock is moderate, its obvious that the GP 800 is not the most suitable scooter for downtown use. It may be ridden through the centre of the town occasionally, almost like a touring bike would do. Thus while on normal town traffic there are no compromises asked to the rider, on downtown rides its not really usable. It feels like a committed touring bike, not really addressing to many riders out there.
The comfort of the Gilera over street imperfections is superb, given the scooters’ standards. Its one of the very few scooters around, which provide comfort equivalent to that of a motorcycle. Well, almost. If the visitor of this website has not fully comprehend this yet, its one of the most comfortable scooters of the market.

On B-roads the agility of the GP 800 is a nice surprise to the rider. Specifically the agility is combined with superb stability, indicatively the wheelbase is 1585 mm, (62.4 in) long. The Gilera has been transformed now to a very friendly and utterly confident scooter.

At the fast pace, riding confidence is enhanced even more by the robustness of the scooter. On decent roads the GP 800 becomes a very fast scooter that will puzzle quite a few bikes trying to confront it. The speed obtained between the bends is really great. Feedback to the rider becomes moderate close to the limit, riding confidence is not decreased easily though.

On low friction factor roads, feedback to the rider becomes average relatively early as the speed is building up, hence rider will not enjoy fast pace riding despite the stability of the robust scooter.

On the highway the electrically adjustable screen has to be risen at the highest position from the up-down switch at the right handlebar. The air resistance will be felt on the helmet and in case of a tall rider on the shoulders as well. Eventually air protection is not equivalent to that of a touring bike.
Actually a riding pace of 170 km/h (106 mph) indicated figure may be preserved on the scooter, which is the maximum speed on the highway still comfortable to the rider. Stability is excellent for the scooters’ standards, even close to the top speed.

Optional/reliability/build quality: Despite the large rear 15 inch wheel, the storage space under the seat will accommodate a full-face helmet. It would be better if there were small storage spaces at the legshield as well. A centre stand is provided which is tricky to use, not really due to the extensive weight of the scooter. The daunting part is the foot applying the force that gets very close to the silencers, making things difficult to the rider. A handbrake is also featured, which makes parking easier on downhill or uphill roads.
There are no specific reliability issues, build quality is good.

Comments: The upper triple clamp looks genuinely sporty from the riding position. The double silencers at the left hand side of the scooter and the projector lamp at the front also amplify the sporty scooter character.

The engine capacity of the GP 800 is the greatest so far, this engine is the most powerful up to now on the market. However despite the excellent performance, this results to a uni-dimensional character and the extensive scooter’s weight of course.
In other words it’s the fastest scooter out there, stability is top class, there are some scooter advantages which may be identified, although at the end of the day the disadvantages of the mega-scooter family are also there, which are about the same with big touring bikes.
Therefore in case of everyday downtown rides, a small scooter will be necessary, soon. This is oxymoron, although it helps future owners to their choice! 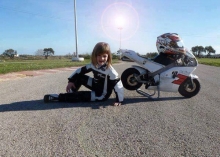