Engine: The engine has lots of torque and its powerful enough for a single cylinder one. The bike reaches easily the 130 Km/h , after that it needs some time for the top speed of 160 Km/h.
A disadvantage is that at the early models there was a surging problem below 3000 rpm, which was solved by dealership recalls.

Riding position: The riding position is neutral, due to the high seat the rider has a good supervision of road traffic. Suspension tends to ride than handling, marginally affecting feedback to the rider, wherever the ride is.
On the road : On urban rides the bike is agile, comfortable and very effective. Of course the effortless, swift and highly secure town rides are an essential element for the XT-X. The thin shape and the huge steering lock make it possible for the bike to take advantage of small traffic gaps.
Out of urban areas if there are any imperfections on the road, or on soil roads, the bike is still very comfortable despite of the 17 inch wheels. The agility of the bike together with the wide handlebar allow easy changes of riding line. Agile, tempting,and fun to ride.
At the fast mode according to the tires fitted, feedback gets less as speed increases and according to the position and riding style of the driver, the rear wheel will normally oversteer, rarely both  front and rear. At the limit feedback could be greater and the rear wheel slide could be more progressive. Also at very high speed changes of direction could be faster. However on high friction twisty roads the XT-X may be extremely effective.
Brakes are powerful and user friendly.

Comments:Really good in urban areas, or B roads. On national roads gets tiring and runs breathless. Close to the top speed some minor weave could take place, which is not frustrating. 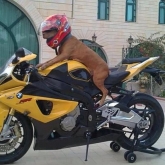