Actually the rider gets noticeable vibrations on the saddle. Under full throttle acceleration the Athlete reaches the speed of 30 km/h (19 mph) fast, the speed of 60 km/h (38 mph) moderately, 100 km/h (62 mph) slowly and the top speed of 118 km/h (73 mph) very slowly. The above mentioned speeds are indications on the dash.

Therefore the performance is inferior to the macho design of the Athlete, although its more than adequate on normal conditions, mostly due to the torque provided. Except from the electric starter, a kick start is available. A fuel reserve indication is provided, not the actual fuel level though. The top speed is affected greatly by road inclination. The engine could be deriving from the Kaze 110, after a possible increase on displacement and compression. An average fuel consumption figure is 3 l/100 km (94.16 mpg) on a nimble pace of riding.

Riding position: The height of the saddle is low, it will be very suitable to short riders. The rider is placed over the Athlete, the riding position is slightly more sporty than a cub. This is due to the clip-ons which are relatively high while the saddle is low. This results to a minimum weight transfer on rider’s arms. The torso is inclined to the front. Accessibility is inferior to that of a cub, due to the tunnel in the middle of the Athlete.

The pillion is seated slightly higher than the rider, the saddle is quite narrow, yet soft. The knees form a sharp angle as well as the handgrips. Conclusively the pillion position is also sporty, which seems logical since it is intended to rider’s girlfriend instead of his mother! The dimensions of the Athlete are decreased, while the weight (104 kg -229.3 lbs) nominal dry, feels normal.

On the road: There are two substantial differences between the Athlete and a cub, the first is the shock and the second is the fuel tank which has been moved to the front of the rider. The shock is horizontal without linkage, the spring preload is adjustable. The swingarm features a brace. The fork feels soft while the shock provides average firmness.
OE tyres are IRC NR 73 with dimensions 70/90-17 at the front and 80/90-17 rear. They are considered a moderate choice in terms of handling, especially on low-friction factor streets.

Since the Athlete derives from a cub, the modifications performed make the riding of the Athlete quite different from that of any cub. Because the fuel tank has moved at the very front of the rider, the front end of the Athlete feels heavier while the weight on rider’s wrists remains negligible. Thus in town the Athlete feels more like a motorbike, due to the front end feeling.
The increased stability is also a significant feature, since agility is inferior to that of cubs. Urban rides are obviously sportier than on a cub, the Athlete is still quite neutral though, almost like a commuter bike.

On downtown rides, Athlete’s usability is decreased compared to the cubs, since the tunnel in the middle of the bike does not favor accessibility. Well there isn’t any clutch lever at the left hand which makes the life of the rider easier. Nevertheless it would be a disgrace if rider mounts a top case on a bike with such an obvious sporty character.

Filtering is easy on the Athlete since both the clip-ons and the mirrors are slightly lower than car and SUV mirrors respectively. Steering lock is superb, it will definitely help rider on downtown rides. Comfort is comparatively good over urban potholes and it gets even better if rider lowers his torso further to the front. The mirrors provide a picturesque view mainly of rider’s elbows…

On B-roads the Athlete feels like the right bike to get the job done. The stability provided inspires confidence to the rider, while the lack of agility compared to cubs is also noticeable. These riding elements seems to derive from that heavy front end, not from the steering geometry. Actually the wheelbase is 1240 mm (48.81 in), just 10 mm (0.4 in) smaller than that of  the quite stable cub Kawasaki Kaze 110.

At the fast pace on low friction factor roads, the Athlete provides confidence up to a point due to the OE tyres. Rider will soon feel insecure charging the Athlete around bends. It’s a pity since the bike’s set-up favors spirited riding. At the end of the day, cornering to the limit, the Athlete feels very light.
On high friction factor roads rider will certainly have fun although once more mounting decent tyres in terms of handling riding confidence and feedback would be increased. The performance of the engine becomes the second issue for the rider on conditions like this.

If it’s necessary to ride on the highway, the engine performance is not adequate to make the rider confident. It would be a joke to raise any wind protection issue, although the speed obtained by the Athlete on the open road does not require air protection.

On dirt-roads the Athlete is comfortable. When the fuel tank is full, the weight is even more biased to the front, which results to decreased confidence. The brakes are also an issue as it’s described below.

Petal type disk brakes are featured front and rear together with two piston calipers. Of course there is one rotor at the front. The front brake is linear providing average initial bite. However it’s comparatively powerful, providing average feedback, requiring for some decent roads if the rider wants to decelerate hard in a confident manner. In case of hard braking on low friction factor streets, the front brake tends to lock the wheel to either side, which is mainly due to the OE tyres. The rear brake provides average initial bite, too much power and relatively good feedback.
The result of the above is that the Athlete will require decent roads and tyres to deliver a superb braking. On low friction factor roads rider has to be cautious in case of emergency braking.

Comments: To refuel the bike, rider has to open the cover in front of him, where the fuel cap is revealed. The storage space under the seat is adequate for a raincoat. The seat cover underneath the rider is anti-slip while its surface is normal under the pillion. Is it deliberate so that riders’ girlfriends do slip to the front under braking? Just a silly sexist joke that is…
The lights are good.  A centre stand is standard. The kick stand does not cut-off the engine if it is deployed and rider engages a gear. It operates with a spring and it is retracted whenever the bike is set upright, hence it requires some familiarization. This has become usual on normal cubs, its the first time that  its installed to a bike.
The  brackets for a frontal  number plate have not been removed since they are not required in EU and most countries.

The Athlete has been introduced to the Asian markets by 2011. It belongs to the moto-cub category which is popular in those markets. It combines the simplicity and the engine of the cubs, with a motorcycle streetfighter styling and a commuter motorcycle riding position. Apparently the Athlete addresses to youngsters since usability is decreased while the styling is utterly aggressive, up to an alien looks level. In the case of the Athlete though, the macho looks are not supported by the performance of the engine.
On a straight line the rider will play it cool next to a Υamaha T135 (available as Sniper, Jupiter, 135LC, Exciter, Crypton X in several countries) while he would be more confident if the bike was equipped at least with the engine of the ZX-130. However this engine is a basis for the countries featuring the 125 c.c. riding license, where the fast young riders may proceed to modifications to get the performance which is equivalent to the bike’s potential.

- The brakes are more powerful than ideal on slippery roads with the OE tyres.

- The engine performance does not coincide with the macho looks boasted by the Athlete. 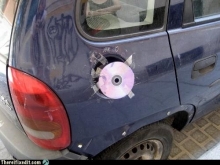