The bike is equipped with  both a kick start and an electric start. The engine is fed by a carburetor and a fuel enrichment system, which could be the reason that the bike was surging during the review when opening the throttle.

The performance is average for an air cooled 125 c.c, engine, which means that the rider has to twist the throttle wide open to get some decent oomph.
Τhe Ace 125 does not feature an rpm meter. According to the manufacturer’s design, when the side stand is deployed, the starter will operate although the engine doesn’t start. An indicative average fuel consumption figure is 3,5 l/100 km (81 mpg Imperial).

Riding position: This could be the most prominent feature of the bike following the styling. The Ace is very narrow and light, rider has to sit in a genuine, rearwards and on the bike style, since the fuel tank is very long, while the high pegs are also located to the rear of the bike.

The weight at the rider’s wrists is considerable. Thus the rider imitates the racers of the past, in a unique sporty riding position which has nothing to do with the present and everyday usability.
However the editor of this article considers that very young riders will not feel that the Ace is quite uncomfortable on everyday use.

The dimensions of the bike are small. The weight is 87 kg nominal dry. Although the bike is equipped with pegs for the pillion, the standard saddle is roomy enough only for the rider. A longer, optional seat is available though.

On the road: The suspensions are soft, the twin shocks at the rear are adjustable to spring preload. During this test ride they were left to their  standard, softest setting.

The OE tyres fitted are Youanxing with dimensions 2.75Χ18 at the front and 3.00Χ18 rear. Their advantage is that the tread refers to the bikes of that era, although they are not the smartest choice in terms of handling.

In town the riding position proves to be uncomfortable. The weight on the rider’s wrists is considerable on urban rides, especially for a 125 c.c. bike. The rider’s pegs require some caution, as starting to move or whenever rider steps again on them, it’s difficult not to close the pegs! Filtering is superb on the Ace since the very narrow width of the bike is ideal to pass through stopped cars.

The comfort provided over urban street imperfections is average at the front while it needs some improvement at the rear. The Ace will also require some compromise from the rider in case of not near-perfect streets. Thus in terms of comfort this is an unconditional sporty bike which will require some patience from the rider especially on poor road surfaces.

On B-roads the Ace provides superb stability. It’s still an agile bike, although its the stability the riding feature that becomes most prominent. The engine however is weak if the task is to make things interesting, which is also valid for every 125 c.c. motorcycle of the market, especially the air cooled bikes.
At the fast pace for an 125 c.c. bike, the editor would prefer to be much closer to the front wheel so that he gets better feedback.

A disk brake is featured at the front together with a two pistons caliper and a drum brake at the rear. The front brake provides relatively good initial bite, power and feedback, while the rear is average on these three aspects.

Comments: A smaller 50 c.c. variant with a four speed gearbox is also available, a two years guarantee is provided on both versions. The build quality is good for a Chinese bike. The styling imitates the 1962 Honda RC 110.

The Ace is a small motorcycle intended to specific use, suitable for sporty yet eventually slow rides, whilst it is ideal as a living room decoration, instead of a painting! On everyday use it will ask some compromises from the rider, although for some people the looks are more important than usability! 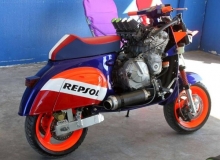