Engine: The new V twin air/oil cooled six gear engine of 803 c.c., featuring two valves per cylinder, is a classic …quiet, vibrations free, yet powerful V twin. According to the selected gear, 2500 to 3500 rpm are needed in order to prevent light juddering when opening the throttle. Because of this, lower band of the engine operation, which is frequently used in town, is a point that may be improved.

From 3000 to 3500 rpm, depending on the selected gear, a constant power delivery is provided, which is very linear to the whole power band. Town rides will require up to 6000 rpm. Sport rides will require up to 7000 rpm. The twin cylinder power delivery is most helpful for immediate acceleration at the exit of every corner. Rider may feel the engine cycle bursts pushing the rear tyre to its limits on every corner exit when riding on low friction roads. At the very fast pace, engine revs should be kept at the higher power range, rev limiter intervenes at 9000 rpm. Actually there is no point to push revs further than 8000 rpm, as the bhp curve feels like going downwards at the very end.

Generally, the torque produced will require less gear changes, except from the ultra fast riding. The gearing is long at first, second and third gear. The power produced is more than adequate for the little Hypermotard model. Engine power delivery is user friendly to new riders. It will satisfy the experienced riders as well. Experienced riders who are certain that they can take advantage of the user friendly 81 bhp output, should go for the greater model at the line up.
Τhe clutch is wet, slipper and …quiet. Τop engine output 81 bhp at 8000 rpm and 75 Nm torque at 6250 rpm, nominal values.

Riding position: The seat for the rider is narrow, its height is normal, shorter than big brother’s. Average height riders or taller will feel confident enough, stepping a foot on the ground. The 796 is lighter than the big brother, however the weight will be noticed, 167 Kg dry, nominal. It is not appropriate to compare the weight of the Hypermotard 796 with that of the single cylinder supermotos. However as it is a sports motorcycle, the weight issue is significant. Centre of gravity feels low. The combination of centre of gravity and the mass of the motorcycle produces a relatively light feeling bike.

The dimensions of the bike are average for the motard category, that means a narrow bike and a wide handle bar. Mirrors are folded at the two ends of the handle bar. If they are unfolded, handle bar gets extremely wide. It will be a drawback then on town rides, as filtering will be prohibitive. Riding position places rider mainly over the bike. However its not a racing riding position. It is as good and efficient as it can ever be, being user friendly and aggressive at the same time. Consequently rider is kept on alert.

On the road: The front fork a 43 mm Marzocchi, not adjustable, feels rather firm. The rear shock, a Sachs featuring spring preload and rebound adjustments feels rather soft. Hypermotard 796 is a user friendly and vivid bike on town rides. Rider will feel at home, just from the first ride.

The combination of engine performance – handling – braking results in a very familiar and efficient bike for spirited town rides. If it is needed, it will serve for every day use also, there is no extreme or racing bike feeling. As a result, fun will be created out of dull town use.
Agility will permit the rider to take advantage of traffic gaps as soon as these are formed. Steering lock is good for the motard category , there will be no problem maneuvering the bike through traffic.

The wide handle bar is sometimes at the same height with that of car mirrors, which will be disturbing. Unfolding the mirrors in town , they will easily hit car mirrors during filtering. The modifications that may be preformed to the mirrors issue are described at the following paragraph, comments.
The lowest engine power band is to be avoided as a light surging is noticed when opening the throttle, especially in town. Feedback to the rider is great in town rides handling. At the same time the Hypermotard absorbs street imperfections really well.

On high friction B roads, it’s a jolly good bike. It will be hard for the rider to behave himself. Agility, feedback, handling, engine performance and brakes are really good. However it’s the result of the above that creates a homogeneous package feeling and that is superb. Because it’s a motard bike, agility is great, however not top class. Its middle corner stability that its exceptional.
When the pace gets faster, rider feels that the Hypermotard 796 is a complete sport bike. It will be only in ultra fast riding that feedback to the rider is gradually reduced. At this exact point there is no comparison with the big brother, even the plain version. The difference lies to the fork and the cause is the cost.
Engine performance is adequate for the bike’s character. At the very fast pace, an experienced rider will ask for greater power output.

On low friction B roads the Hypermotard character excels. What was described on high friction B road performance applies here as well.
Road imperfections are easily absorbed , feedback to the rider is not sacrificed because of that. Even at mid corner imperfections, Hypermotard 796 will easily manage.
Due to the low friction, handling limits are easily reached, there are some issues that should be considered though: The tyres that the bike is equipped with, plain Pirelli Diablo Rosso, are relatively hard. The powerful front brake will easily lock the front wheel even at a considerable speed, if the tyre is not carefully warmed. Additionally at the very fast pace feedback is greatly reduced due to the combination of tyres-suspension. This results to either reduced confidence for the rider, or he will not reach the Zen limits, mid corner.
On supermoto style riding, in order to place the bike sliding the rear at the entrance of the corner, rear brake has to be extensively applied as the engine will not adequately brake the rear wheel.

On the highway, engine performance will easily keep a higher than 150 Km/h pace. As it is typical for the motard category, above 150 Km/h rider plays the hateful role of a wind blasted sail on top of the bike. Long distance travelling looks like even longer then. Top speed at 200 Km/h.
The two disc brakes at the front, use four piston calipers and the rear disc brake which uses twin piston caliper, are really powerful, providing nice feedback and initial bite. Its only on low friction roads that a soft front tyre will be asked for, as there is a lot of power to be transferred on the road. In every case rider will be satisfied. Steel brake lines are used, front and rear.

Comments: Interesting design highlights: The axis supporting the front fender, originating from the front brake caliper adaptor. Also the aerodynamic pillion hand grip.
To solve the mirrors issue, Ducati provides the following modification kits, moving the mirrors above the handle bar: 1) The simplest solution, brackets, 90€. 2) Mirrors with integrated LED light indicators. Also bar end weights. 245€. 3) Full kit including mirrors with integrated led light indicators, bar end weights and hand guards, 400€. It is the most expensive, although the best looking solution.
Referring to the handling comments, on many other motorcycles, these would be irrelevant. However Ducati bikes inspire respect, especially to this subject. An older and humble Monster will teach a lot of riders what Ducati handling is meant to be, even if tyres fitted are not new. Hypermotard 796 is a great looking bike that will absolutely fulfill the expectations of the great majority of riders. However what was mentioned for the Monster cannot be applied to the Hypermotard 796. Buying the  Hypermotard 1100, an experienced and more generous rider gets more than a bigger engine.

-Mirrors are not functional -Absolute handling on low friction roads, as set by the Ducati high standards. 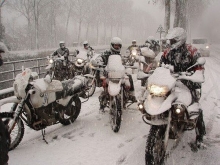