The bike tested was a 1999 model, 17000 Km clocked. Supermotard rims were fitted, as well as new tyres, Continental Contiforce. A full exhaust CRD system and a K&N air filter had been installed. The rear suspension was softened for the owner.

Engine: The single cylinder air cooled engine of 595 c.c., fed via a carburetor, provides adequate torque and power for everyday use and up to an extend for sporty riding.
According to the selected gear, 2 to 3000 rpm will be needed to eliminate engine low revs surging. Torque provided is really useful. Actually the range up to 5000 rpm is sufficient for town-everyday use or even sporty B roads use, given the category standards.

From 5000 to 6000 rpm power is increasing, however at a lower pace. On the contrary some vibrations are noticed.
Finally from 6000 to 7000rpm, vibrations are really vivid. Actually, power loss is noticed at the top end, 7000 rpm.
The power response is evidently increased, compared to the standard 45 bhp. This means instant power boost, no skidding or needless wheeling. On tight B-road riding, high friction tarmac, new tyres fitted, engine revs remained constantly below 5000 rpm and the bike was flowing. Eventually limits were defined by suspension.

Due to the 17¨ rims fitted, the speedometer indication was always greater than the actual speed. In many cases top speed indication was 185 Km/h, some 20 Km/h higher than the expected. For the indication of 160 Km/h, 6000 rpm were needed. Vibrations will be felt from 5000 rpm upwards, eg on the highway. Above 6000 rpm, vibrations are disturbing. Wobble will be felt close to the top speed due to the high front fender. Riding will become tiring due to air resistance close to the top speed.

On the road:On urban rides, the XT is very agile. Rider will feel relaxed, nothing to worry about concerning riding. Steering lock is superb, rider will take advantage of every traffic gap. During filtering the handle bar height is usually greater than car mirrors. The width of the bike which is little, will also help filtering. The soft suspension provides a creamy sensation, greatly absorbing potholes up to a point. On bumpy roads , riding quality is good, not top class though. Some road imperfections will find their way to the rider at last.

On low friction B roads, rides are superb and comfortable, at a calm or even nimble pace. Despite the 12 years since the production of the bike, it’s a pleasant bike to ride there.
In a nimble pace the XT is not as agile as it would be expected. Handling is towards stability than agility. Of course this doesn’t mean that the XT is the most steady bike cornering. It just means that turn in is not really fast, however the bike is generally speaking neutral in the curve. At a pace like this, feedback to the rider is relatively good, handling is predictable. At the fast pace some serious wobble takes place. Because of the new tyres fitted rider will feel confident to charge, however feedback is really decreased. Finally it’s the wobble that will slow down the rider, mainly due to suspension. Some wobble originating from the frame will be felt at the very fast pace. Feedback to the rider will be equivalent of a prophecy. New tyres are the only part of the bike providing confidence when riding fast.

On high friction B roads, good riding quality is provided, the XT becomes a fun bike. Rider will be relaxed to go sight seeing. On a higher pace feedback is diminished, some flexibility will be noticed, its hard to ride following exact cornering lines. The wide handle bar is a great lever to apply force whenever a rapid change of direction is needed. However the bike inertia is evident in cases like this.
On the highway, engine vibrations together with the relatively low performance, will ask for a travelling speed which is somewhat inferior from the modern standards. The narrow seat will become exhausting after some travelling time.
On dirt roads its really comfortable, absorbing bumps, despite the 17 inch wheels. The road tyres will not allow incline when cornering on soil roads.

Brakes: On high friction tarmac roads, brakes are user friendly. On emergency braking the front brake will lock the front wheel instantly. The soft front suspension will start to get compressed then. The front brake will be weak then to lock the wheel, up to the end of the braking procedure, providing really average feedback. The rear disc brake is weak, feedback is diminished.
On low friction B roads, braking is adequate only for routine stops. On emergency braking the front disc brake is powerful enough to lock the front wheel, providing feedback which can only compete zero. The rear doesn’t feel powerless, feedback is decreased. Consequently braking, for the specific bike tested, is user friendly, without adequate feedback, in need of improvement.

Comments: Used bikes price is really low, close to the new mopeds price. Provided that there are no requirements, this bike will be adequate for various fields of use. This is really logical as the original design of the bike goes back to 1990. If there are exact riding requirements, the XT660X should be chosen. A lot of money and modifications will be necessary to make the XT perform like the younger and greater brother. However on B roads a solid smile on the rider’s face will be formed, on one condition: A new pair of rubber. 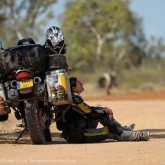